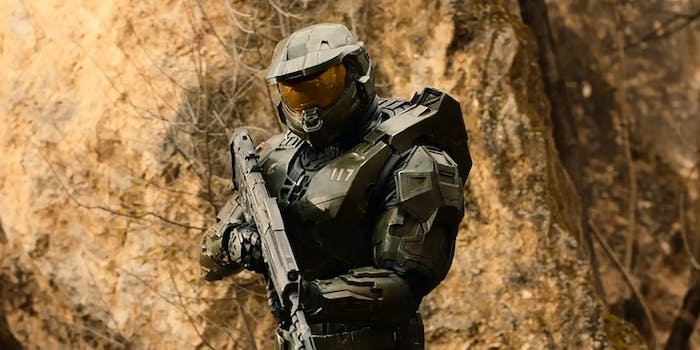 According to 'Halo' lore, the game's protagonist was chemically castrated, making this a controversial creative choice.

Following a long tradition of poorly-received video game adaptations, Paramount’s Halo TV series is pretty unpopular among fans of the game. While the show earned middling-to-positive mainstream reviews, a vocal contingent of Halo fans have been complaining about canonical inconsistencies since the show premiered in March. The latest episode brought a new issue to the foreground: Master Chief’s sex life.

And no, this isn’t about the running joke that Master Chief’s armor jerks him off.

While Master Chief is often perceived as a rather generic video game protagonist (ie. a self-insert action hero with minimal personality), the Halo franchise also includes a wealth of spinoff media, fleshing out Master Chief’s origins and Halo lore in general. One element of this lore is that some Spartan super soldiers (like Master Chief) are chemically castrated as part of their “augmentations,” a process that’s forced upon them as children. It’s a pretty grim piece of backstory, viewed by fans in a variety of allegorical ways—and it explains why Master Chief doesn’t have sex in the games.

This brings us to the TV show, which sparked controversy in episode 8 by depicting Master Chief (Pablo Schreiber) having sex with a woman (Covenant spy Makee, played by Charlie Murphy). The fandom response is very negative, focusing on Master Chief’s sexuality and the ethics of the sex scene itself.

Some of this backlash has already turned ugly, with author Anne Wheaton facing a deluge of Twitter harassment because some angry Halo fans mistakenly thought she worked on the show. In reality, she has nothing to do with Halo and didn’t understand what the backlash was about.

Another unexpected angle to this controversy is that some fans interpret Master Chief as asexual, and resultantly accused the show of asexual erasure. Given that this conflates asexuality with forcible castration (yikes!), that’s a pretty divisive viewpoint in itself.

Meanwhile, others are just making fun of the whole situation, congratulating Master Chief on finally losing his virginity after 21 years of canon, and cracking jokes about incel gamer stereotypes.

While this is the first time we’ve seen a fandom get mad about their hero not being castrated, overall this is a familiar kind of backlash: A clash between the creators of a mainstream entertainment franchise and a core group of fans who have very specific beliefs about canon. The people making the show probably didn’t realize that Master Chief’s sex drive would be such a divisive issue, because giving your hero a love-interest (albeit an ethically dubious one) is just an extremely obvious choice for a TV adaptation of this type.