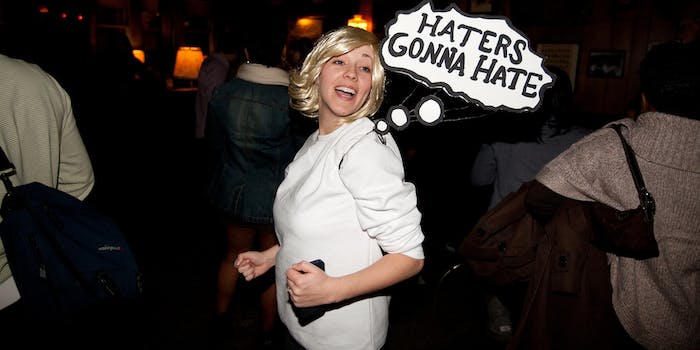 Halloween: The best and worst thing to happen to the Internet

To the Internet! The cause of, and solution to, racist costumes and terrible prank videos.

All right, I confess. I don’t care for haunted houses. Ghost stories leave me cold.

What I like about Halloween is the spirit of play. It’s a chance for grown-ups to dress up, to make believe, and to have a little childlike fun. It’s also a day of the year when the Internet crosses over into real life as the memes we’ve laughed at all year long show up at costume parties.

Popular costumes based on Internet memes this year include the IKEA monkey and Unflattering Beyoncé.

Halloween might be the Internet’s favorite holiday, and I think it’s because this spirit of play, of making jokes with your friends, lives on the Internet every day.

One of my personal favorite costumes this year is one toddler’s costume: She’s a stick figure. And I defy you not to smile ear-to-ear when you watch this video of a glowing stick figure stumbling toward you.

The Internet didn’t create the notion of stick figures, of course, but it does give us the chance to tape a stick figure come to life and share it nearly effortlessly with our friends and strangers alike.

Peer-to-peer, DIY services like YouTube have inspired us to reach out to strangers to make them laugh and smile.

Recently, a redditor was bored visiting his parents in the Irish countryside, so he created perhaps the greatest selfie ever produced. He sits astride a giant charging chicken, as if he’s Aragorn leading the armies of the Fellowship against the forces of Mordor.

That image, in turn, inspired the Reddit community to create T-shirts, mugs, and even enormous wall-art stencils. So if you see a wall tagged with a heroic chicken rider while you’re out trick-or-treating, know that you’re seeing a little bit of Reddit.

The spirit of camaraderie that the Internet can create is nowhere better demonstrated than in a recent video where strangers held up funny signs to subway conductors, just to make them laugh. Watch the video yourself, because the laughter is infectious.

Another recent video has YouTube pranksters pretending to buzz strangers’ hair (a la Jackass) with an iPhone app that mimics hair clippers.

Many are pissed at first, but when they realize it was just an iPhone app, they share a laugh with the trickster.

The hair-clipper prank skates on a fine line. Pranks can easily veer into meanspiritedness. And jokes that seemed funny within the bubble of our immediate circle of friends can fall flat—or worse—in the wide circle of the Internet.

Many (young) people all over the United States recently decided that it would be really funny to dress up as Trayvon Martin and George Zimmerman. The Internet, predictably, did not.

Similarly, a new app makes it easy to create cartoon strips and share them on Facebook. The results are often nasty, mean-spirited humor, including fantasies of abuse, violence, and racism.

And let’s not even get started with the pick-up artist videos disguised as humor.

The Internet also has a tradition of supporting this kind of humor. The common refrain, U MAD, BRO?, is an adolescent claim of triumph at having simply gotten a rise out of someone. It is the sophomoric satisfaction of having made your sister angry, which is not truly as good (if we are honest with ourselves) as a laugh, but it’s better than indifference.

It is a painful rejection not to have our jokes laughed at, so we often try to reject the “humorless” people who need to “lighten up,” before they can reject us.

Certainly, some people do need to lighten up and stop being so precious about everything. But just because something is offensive doesn’t make it automatically funny. Some jokes bring us together and some jokes divide us. And maybe that racist joke killed with your real-life friends who share your views, but taking that same joke online puts you outside the bubble of people who look and think just like you.

You can say U MAD, BRO? and try to ignore the fallout on that picture of you in blackface with ketchup on the chest of your hoodie, but you still have to watch the comments pile up on your Facebook page. At the very least, the Internet makes you confront how your “humor” affects other people.

And that’s why we get IKEA monkey costumes, stick-figure costumes, and videos of subway conductors laughing. Through the Internet, we learn that it’s much better to share a joke than just to tell one.