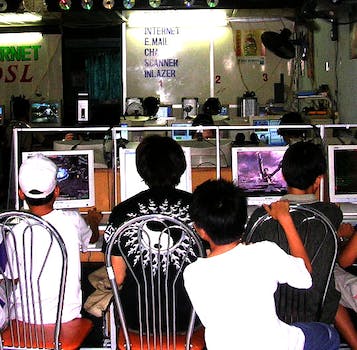 A high school dropout in China who turned to a life of hacking and extortion to finance his online role-playing game obsession has finally been busted by police after a cross-country digital manhunt.

The hacker, surnamed Zhang, would take over the websites of companies across China. He demanded they pay up or he’d clear their sites entirely. The first victim, a company in China’s southern province of Guangxi, coughed up 50,000 RMB, or about $8,000. After that, Zhang attacked six other sites, three of which paid another $8,000 each. All told, he came away with about $33,000.

And all so he could keep playing online RPGs.

Cops busted Zhang in an Internet cafe in the coastal city of Shandong after tracing him to a bank account where one of the companies had transferred the extortion money.

Zhang’s hacking career had ended where it began, more or less. After dropping out of of high school, the Shandong-native moved to Guangxi province, where he worked part time at an Internet cafe—and got addicted to online games.

“At the time, I really wanted set of good armor,” Zhang explained to a reporter for Hong Kong’s iFeng.

So he taught himself hacking skills and was soon taking over other players’ accounts, from which he’d siphon in-game cash to his own account.

His exploration into hacking software led him to experiment with other tricks—like taking down websites. It was all very impressive for a 24-year-old who was entirely self-taught. If only he’d learned, at some point, how to set up an anonymous Swiss bank account.