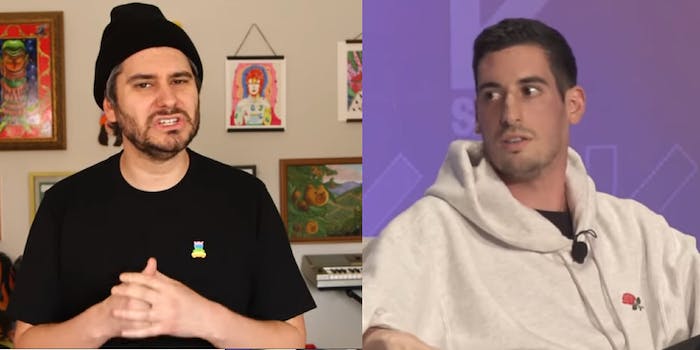 The 33-year-old YouTuber uploaded a video on Wednesday calling out the shady business practices of Jerry Media, which runs the FuckJerry Instagram account. The video shot to the top of the r/videos subreddit on Thursday. The FuckJerry account has been heavily criticized in the past for its blatant theft of memes and other comedic content.

Klein also specifically called out FuckJerry creator Elliot Tebele for his focus on monetary gain. Klein shared a clip of Tebele saying he “never had a specific goal,” but “always wanted to make money.”

Klein mocked everything from FuckJerry’s business practices to Tebele’s “dead, soulless eyes,” in the course of the video. He explained how FuckJerry grew into such a successful page and showed numerous clips of the press coverage—good and bad—that the company has received.

Klein also pointed to a video from Vic Berger, one of the many creators FuckJerry has reportedly stolen content from. The video was created in late January and exposed a number of FuckJerry’s shady business practices, including an exchange between a member of FuckJerry and Berger. Berger’s video received an almost immediate “copyright takedown request” from James “Krispyshorts” Ohlinger, Jerry Media’s chief content officer.

FuckJerry has started to see some consequences lately, too. As Klein explains in the video, a number of jilted creators and comedians started the #FuckFuckJerry campaign. The campaign is aimed at exposing the company. “This is backed by comedians such as Tim Heidecker, Vic Berger, Patton Oswalt, John Mulaney, Whitney Cummings, Colin Hanks, Amy Schumer, Natasha Rothwell, Bobby Moynihan, Julie Klausner just to name a few,” he said.

FuckJerry responded to the backlash, too. Klein included a statement that Tebele made back in early February. “I know I’ve made enemies over the years for using content and not giving proper credit and attribution to its creators,” the statement reads. “I simply didn’t give any thought to the idea that reposting content could be damaging in any way.”

Klein tore Tebele’s defense apart. “Maybe when you started it that’s an excuse,” Klein said. “When you have ABC News in your office trying to study the meme masters, and they’re under the impression that you created all this content that might be a good time to be like ‘oh no we’re curators, we don’t actually create anything.

“Giving credit? Getting permission? I mean these are really thoughtful, visionary guides to do this now. In 2019,” he added. Klein said that the right thing to do would be to provide monetary compensation for the stolen work that made FuckJerry famous in the first place.

“In short my friends, remember this simple message,” he concluded. “Frick Frick Jerry.”