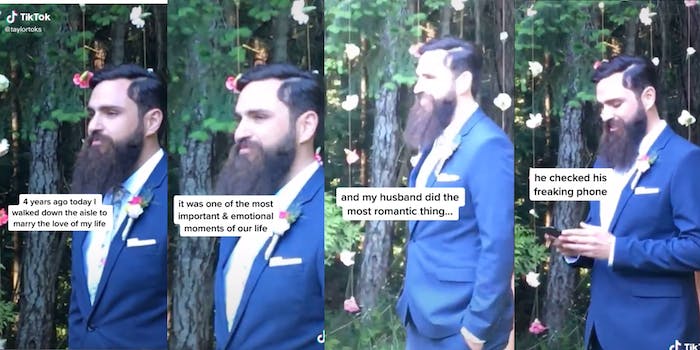 ‘I would have turned around and walked out’: TikTok video shows groom checking his phone while bride walks down aisle, sparking debate

A woman shared a TikTok video of her now-husband checking his cellphone as she walks down the aisle during their wedding ceremony. The video is dividing viewers, many of whom are pondering what they would do if they were put in a similar situation.

While walking down the aisle to a Kanye West song, Taylor Loren’s partner was filmed looking at her before looking down at his… phone.

“4 years ago I walked down the aisle to marry the love of my life,” Loren wrote. “It was one of the most important and emotional moments of our life and my husband did the most romantic thing… he checked his freaking phone.”

Loren herself makes a joke out of it, captioning the video: “husband of the year.” While many commenters have followed suit, others suggested it may be a nervous tic or another expression of anxiety.

“It’s a way to deal with that kind of moments sometimes good times are overwhelming and we [don’t know] how to handle them,” @rogaciana11 wrote.

Another suggested he may have been looking at his vows on his phone.

“Vows are probably on his phone,” @ajbarnhardt wrote. “Chill.”

“He was checking a score,” a third jokingly assumed.

Another commenter shared that her husband’s alarm went off during their vows.

“My husband had a phone alarm go off during our vows,” @kaitlynbarnes06 wrote.

And some more critical commenters saw his actions as a red flag.

“I would have turned around and walked out,” @lesliemoon6 wrote.

Some urged her to get a “divorce.”

The video has been viewed over 2.4 million times since being posted a week ago. She seems to be taking the negative attention the video brought her husband in stride. “When you post a TikTok to troll your husband… and the whole world trolls him for you,” she wrote in a followup video.

She also finally answers the burning question of what he was doing in another followup video.

“Babe, TikTok wants to know what you were checking your phone while I was walking down the aisle,” Loren says in the video.

Her husband—who is again on his phone—gives a simple reply.

“Because Crypto never sleeps,” he says.