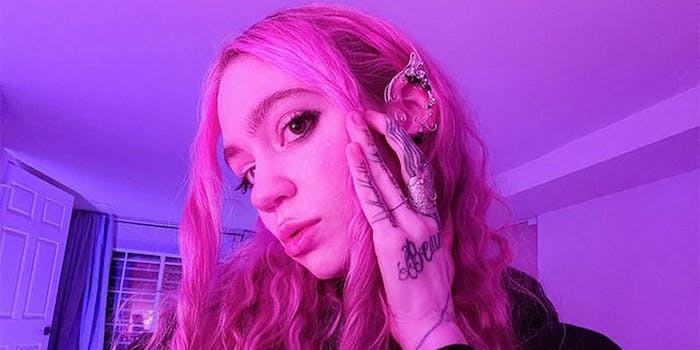 ‘Crypto and gaming’: Grimes admits she trolled everyone with ‘Communist Manifesto’ photos

'I’m still living with e and I am not a communist.'

This weekend saw the arrival of the best paparazzi photoshoot we’ve seen in a while. Taken shortly after her split from Elon Musk, the now-viral photos show Grimes posing faux-casually with a copy of The Communist Manifesto by Karl Marx. This was instant social media catnip.

These pictures are, in a word, hilarious. Blatantly staged, they show Grimes with full hair and makeup wearing an ostentatious sci-fi outfit, loitering in the street with her copy of Marx. Commenters immediately derided this as a transparent publicity stunt (duh), speculating that she was trying to distance herself from Elon Musk’s politics. It was the latest evidence of Grimes’ preternatural ability to grab public attention by pissing people off.

The explosive reaction to this photoshoot highlights Grimes’ unique celebrity persona. Earlier in her career, Grimes was primarily known as a critically-acclaimed musician and producer, coupling innovative talent with a quirky Tumblr-girl vibe. She was too cool to be an A-list pop star, and her politics were seemingly progressive. So when she started dating Elon Musk in 2018, her fans saw it as the height of hypocrisy.

The former anti-establishment indie artist was cozying up to the most hated billionaire in America, defending his union-busting behavior and embarking on a three-year run of absurd public antics. She became the kind of celebrity who people love to hate. And she played into that persona, as proven by this Karl Marx photoshoot.

Posting on Instagram on Sunday, Grimes said she staged the photoshoot because the paparazzi wouldn’t stop following her, explaining, “Full disclosure I’m still living with e [Elon Musk] and I am not a communist (although there are some very smart ideas in this book -but personally I’m more interested in a radical decentralized ubi that I think could potentially be achieved thru crypto and gaming but I haven’t ironed that idea out enough yet to explain it.”

On Twitter, she also said, “I tried 2 think what I could do that would yield the most onion-ish possible headline and it worked haha.” The headline in question was Page Six‘s “Grimes seen reading Karl Marx following split with world’s richest man Elon Musk.”

This was honestly the perfect postscript to this story. Grimes made it clear that she was intentionally trolling, meaning that people just fell into her trap by passing judgment on the photos. (Of course, they were staged! No one in their right mind would think they’re real!) At the same time, her more sincere political statement is perfectly designed to rub people up the wrong way. She supports “radical decentralized Universal Basic Income,” funded somehow by “crypto and gaming”?! Come on. Just tell your live-in ex-boyfriend to pay his taxes.

We’ve reached out to Grimes’ publicity team to see if she has any further thoughts on universal basic income.