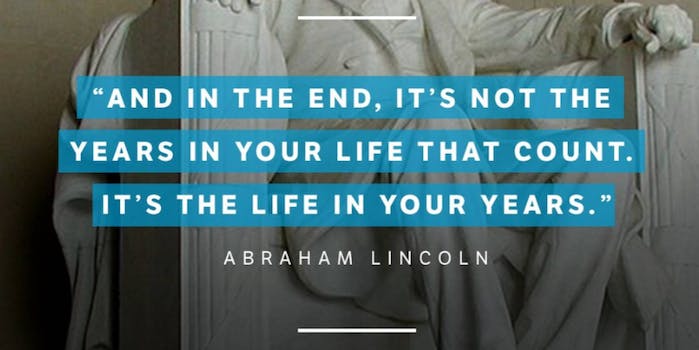 The internet has responded in kind.

With all the hoaxes, falsehoods, and pranks people like to play online, you simply can’t trust everything you read on the internet, and it’s always worth double-checking everything before hitting “send” on that tweet.

On Sunday, the official Republican National Committee Twitter account, intending to honor the birthday of Abraham Lincoln, tweeted a quote from Lincoln that the 16th U.S. president never actually said.

The quote is “And in the end, it’s not the years in your life that count. It’s the life in your years.” It’s an all too poignant and pitch-perfect line. But as many observers noted, including CNN’s Jake Tapper, there’s no evidence whatsoever Lincoln ever said this—rather, it’s one of those baseless quotations that just endlessly floats around the internet.

"SomeBODY once told me, the world is gonna roll me, I ain't the sharpest tool in the shed" – Abraham Lincoln

"I came here to kick ass and chew bubblegum, and I am all out of bubblegum." -Abraham Lincoln

It’s not the only Republican-affiliated social media account to make a mistake Sunday. The Department of Education’s Twitter account suffered an embarrassing couple of mistakes that stirred up mockery around freshly minted Education Secretary Betsy DeVos. First, the account misspelled W.E.B. Du Bois’ name and then made a typo in its apology tweet hours later.

The @GOP fake Lincoln tweet has been live, as of this writing, for six hours after being posted, despite a tremendous amount of jokes and mockery being sent in its direction. Perhaps whomever’s in charge is opting to ride it out?

In any case, it’s a worthwhile reminder that before tweeting out a quote from a famous speaker, especially one outside anyone’s living memory, you ought to do a little snooping on Google to make sure it’s legit. If it can’t actually be traced back to a credible source or if it strictly pops up on quote aggregation sites like BrainyQuote.com, maybe you’re better off not hitting “send” after all.