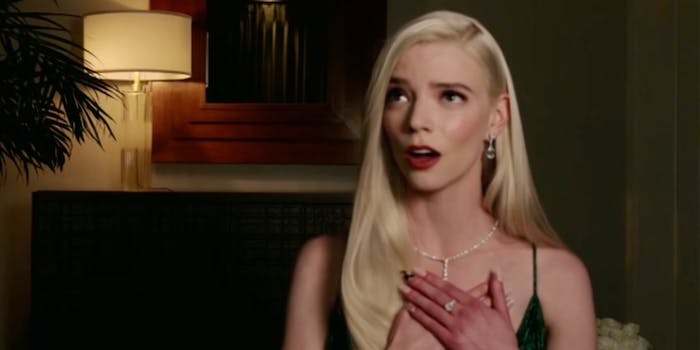 But the ire was directed at the publication who wrote it, not the actress.

Like so many awards shows, the Golden Globes has a horrendous track record when it comes to representation—one that came under even more scrutiny than usual this year. It’s how, in the year 2021, you see headlines highlighting historical wins such as Nomadland director Chloé Zhao becoming only the second woman to ever win a directing Golden Globe or that The United States Vs. Billie Holliday star Andra Day becoming the second Black woman to win the best actress in a drama prize. But an attempt to acknowledge a superlative led to blowback after one publication attributed another first that didn’t apply.

Anya Taylor-Joy won the Golden Globe for best actress in a limited series or TV movie for The Queen’s Gambit, which would then win for best limited series or TV movie for Netflix. Taylor-Joy, who has Argentine ancestry and lived in Argentina for several years as a child, identifies as Latina; in a video for Netflix’s Con Todo account posted in November, Taylor-Joy spoke in detail about how being Argentine shaped her.

Her Golden Globe win makes her the first Latina actress to win a best actress Golden Globe for a limited series. But in an article acknowledging this first, Variety also initially identified Taylor-Joy as a woman of color.

It didn’t take long for Variety to remove the paragraph and update the story. But as the paragraph identifying Taylor-Joy as a woman of color remained up, it was screengrabbed and shared on Twitter.

Many of Taylor-Joy’s fans pointed to a 2018 Vulture profile of the actress where she discussed her Latina identity and the “weird mash-up” of growing up in Argentina before immigrating to the U.K. But Taylor-Joy never described herself as a woman of color; she acknowledged her white privilege that although she is Latina, she doesn’t want to take roles away from non-white Latinx people.

“I’m aware of the fact I don’t look like a typical Latin person, and that’s not fair,” Taylor-Joy told Vulture. “I don’t want to be someone that you can just sub in for that role when I’m really white and blonde.”

Shortly after the paragraph about Taylor-Joy being called a woman of color went viral, it was removed from the article and Variety posted an update acknowledging that Taylor-Joy identifies as a white Latina. The snafu highlights the complications of talking about race and ethnicity as well as how one identification factor doesn’t immediately indicate another. But even with Taylor-Joy’s historic win, it’s also an indication that the Golden Globes still has a long way to go to make its winners reflect our own world.