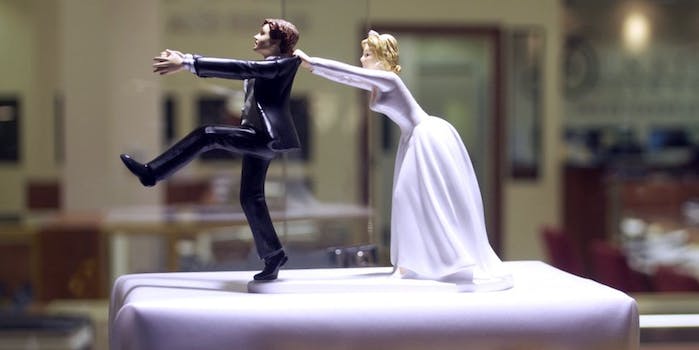 'Why Men Won't Marry You' isn't an argument worth having.

“Why Men Won’t Marry You,“an opinion piece on Fox News’s website, offers a women-blaming perspective of why fewer men are interested in heading down the aisle. Of course, what else would one expect from the network that promoted a book advising husband-seeking women to stroke a man’s ego because “he’ll be more inclined to love you more?”

The blowback to this article on Twitter was predictable:

Suzanne Venker thinks marriage is soulless and loveless, wants everyone to have one http://t.co/DS3R162OpU

Where did this narrative that men used to wait for marriage to have sex come from? http://t.co/LMTS4bsLOn

Ah, to be property again: @SuzanneVenker longs for the good old days. http://t.co/1w6LQrtuTE at @Wonkette

The author of the op-ed is Suzanne Venker, founder of the conservative website, Women for Men. Just a snippet of Women for Men’s mission statement should let you know what you’re in for here: “Decades of feminist propaganda have landed us in a place where women are hailed as heroes, and men are viewed as perpetrators—or just plain losers. That’s what WFM seeks to remedy.”

Venker’s article argues that men aren’t getting hitched simply because they can decide not to, plus there’s nothing in it for them any more. Venker believes that since women are becoming more sexually active before marriage, men are losing their reason to settle down and put a ring on it.

Men used to marry to have sex and a family. They married for love, too, but they had to marry the girl before taking her to bed, or at least work really, really hard to wear her down. Those days are gone.

When more women make themselves sexually available, the pool of marriageable men diminishes. “In a world where women do not say no, the man is never forced to settle down and make serious choices,” writes George Gilder, author of “Men and Marriage.”

This is, of course, a flawed argument, one that totally discredits the decision-making powers of women. Do men who choose not to get married do so just because their dates seem don’t like quality life partners? And why is this only a problem for women? After all, it takes two to do the horizontal tango. Venker’s perspective seems sorely related to the victim-blaming and slut-shaming characterized by American rape culture.

She then shrugs off women’s freedom to seek pleasure outside the confines of wedlock, completely throwing out decades of female sexual liberation: “But how’s that new plan working out?”

Marriage is not the enemy, but attempting to preserve an archaic idea of what it should be is not helpful.

I’d say pretty well. Under the guise of this “new plan,” us womenfolk have the opportunity to find not only our own sources of happiness regardless of our marital status, but also to define what relationships mean to us. We’re able to focus on our careers (something Venker seems to write off), discover the wonders of our own bodies, escape the confines of abusive relationships, and wait for individuals who respect our whole selves. Some of us have even started dating each other!

Women (as well as men and gender non-conformists) have found marriage to be only one of many options toward happy lives and satisfying committed relationships.

Marriage is not the enemy, but attempting to preserve an archaic idea of what it should be is not helpful. Social historian Stephanie Coontz was interviewed for Atlantic Monthly about the evolution of the institution. “The transformation is momentous—immensely liberating and immensely scary,” Coontz said. “When it comes to what people actually want and expect from marriage and relationships, and how they organize their sexual and romantic lives, all the old ways have broken down.”

During the SCOTUS hearings about same-sex marriage, Justice Ruth Bader Ginsburg echoed Coontz’s comments. Ginsburg responded to the question of the Supreme Court having the “legal right to change a ‘millennia’ of tradition” by saying:

Marriage today is not what it was under the common law tradition, under the civil law tradition. Marriage was a relationship of a dominant male to a subordinate female. That ended as a result of this court’s decision in 1982, when Louisiana’s Head and Master Rule was struck down. Would that be a choice that state should be allowed to have? To cling to marriage the way it once was?

Perhaps one of the reasons why fewer people are getting (or staying) married right now is because we haven’t figured out what we want from it yet. Perhaps this is simply a time when we need to allow marriage a chance to grow into something new and better, to evolve the way that gender roles and relationships have.

This is simply a time when we need to allow marriage a chance to grow into something new and better.

To me, the fatal flaw of Venker’s argument is that she is presenting marriage as the ideal for which she seems to believe all women strive, one that we are far worse off without.

If this is true, then it seems as though more divorced individuals would be lining up to get married again, but a Pew survey found that “only 29 percent say they would like to marry again, with women more likely than men to say they do not want another trip down the aisle.”

Boston magazine recently profiled a number of Americans who are single by choice, including Eva, a 51-year-old Bostonian who “has never been married, has never craved children, and has no interest in settling down with anyone in the foreseeable future. The one thing she would like is for everyone else to just accept that she’s happy that way.”

While some surveys, like the 2013 Pew survey Venker refers to in her article, show that most Americans still desire marriage, our feelings about marriage are not straightforward. In 2014, another Pew finding showed that 50 percent of those surveyed believe that society is “just as well off [not valuing marriage] if people have other priorities.”

And speaking of priorities, what about the children? Venker throws out an unsupported argument that desiring children is the primary reason that women get married: “And if no one’s taking care of anyone, why the hell marry? For women, the reason is obvious: kids. Eventually most women decide they want children, no matter how long they put it off to focus on their careers.”

Contrary to the belief that marriage is solely for procreation, people are far more likely to get married for the sake of love than children. In fact, many women are OK never having kids, and a record number of them are abstaining.

Many women are OK never having kids, and a record number of them are abstaining.

According to a 2011 survey from Match.com, men were more likely to report wanting children than women, with 24 percent of men desiring offspring, compared to just 15 percent of women. These findings are echoed in a 2013 Associated Press poll of parents, in which eight out of 10 fathers knew they wanted to be dads, higher than the seven out of 10 moms who reported that they knew they wanted to be mothers.

At a time when nationwide same-sex marriage is on the horizon, it’s time to stop limiting ourselves to what outdated notions of what marriage is, and it’s telling that Venker’s article completely leaves out LGBTQ people. Man, woman, gender non-conforming, gay or straight, I believe it’s time to stop pointing fingers and start respecting each other’s diverse paths to happiness, whether it involves a ring or not.

Jera Brown is a freelance writer and creative writing graduate student at Columbia College Chicago. She writes about being queer, polyamorous and a Christian, sex and body positivity, fitness, health, and technology. You can find her on Twitter at @emotichew.