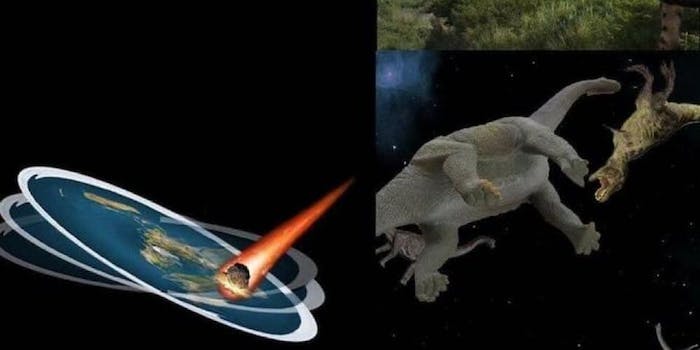 Is this how the dinosaurs really died? (No.)

The late-2010s have seen a revival of the ancient and roundly (sorry) debunked theory that the earth, a spheroid, is actually flat. Celebrities have promoted flat earth theories and dedicated Facebook groups discuss it with varying levels of irony. The flat earth debate, if you can call it that, sometimes plays out through the conduit of meme culture, too. In fact, one flat earth meme is so dumb that even the flat earthers themselves will ban you from their discussions for sharing it.

Finally got banned from the flat earth discord by posting a forbidden image. pic.twitter.com/soqRc00aAw

In a hugely popular tweet, @lord_mandolore claimed Sunday that he’d been kicked out of a flat earth Discord chat for sharing a meme that implies a meteor unbalanced the saucer-shaped earth and sent the dinosaurs flying into space, seesaw-catapult style.

Even the most hardline flat earthers, the ones who seriously wonder if you could sail a boat to the “bottom side” of the earth like in Pirates of the Caribbean, apparently do not believe the dinosaurs were catapulted into space.

The meme itself is quite old, having been posted to Reddit’s r/dankmemes seven months ago, but it didn’t get a huge amount of attention at the time.

The tweet picked up 150,000 likes and nearly 1,000 comments in 24 hours, with most replies congratulating @lord_mandalore and mocking the flat earth believers. Some even posted their own tales of being kicked out of flat earth chats for failing to take the theory seriously.

It’s really telling that, when the dinosaur meme first appeared, one redditor sincerely asked whether it accurately represented flat earth theory. When it’s not immediately clear that your worldview rules out space dinosaurs, your worldview may have some issues.