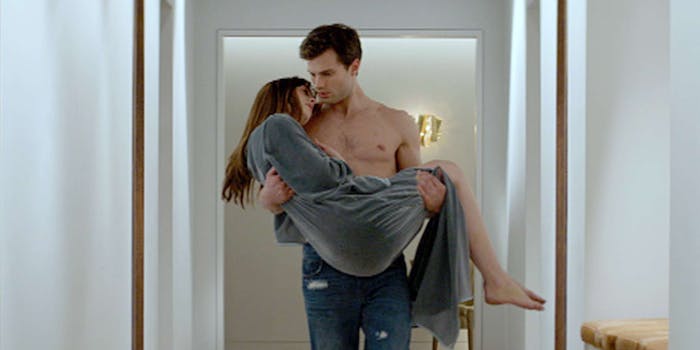 It's even worse than you think.

So everyone ready for another hot take on Fifty Shades?

Last week, I went to a press screening for Fifty Shades of Grey to do a review with the Unusual Suspects at OneOfUs.net. Spoiler alert: It bored the ever-loving piss out of me. But while the movie toned down the more obvious rapey aspects of the book, there was one section that stood out as an example of the movie normalizing what is at best creepy behavior and at worst, a prime example of a movie trivializing and normalizing rapey behavior as romantic.

And that would be the bar scene at the beginning.

To set the stage: Anastasia and her roommate and her Jacob expy Nice Guy friend are at a bar, partying down and generally acting like college students. Ana, after a few shots, drunk-dials Christian Grey and basically tells him off for being a creeper. All well and good.

Christian, his vulnerable-coed senses tingling, demands to know where she is and insists he’s coming to get her.

It’s worth pointing out: He has, at this point, met her exactly twice: once at one of the most laughably awkward interviews ever and once taking her for coffee. After one not-date, he’s already so possessive of her that he feels entitled to give her orders and to come get her when she does something he disapproves of.

Also: He does so without her telling him where she is. So he has, by inference, used the influence of his technological conglomerate to stalk a college student to her EXACT LOCATION. Beyond a flagrant misuse of company resources and likely violating any number of privacy laws—this is the sort of thing the NSA likes to pretend it doesn’t do—this is supposed to be an indication of how much he cares for her.

You know. The college student he met twice.

Anyway. This is all stuff that’s been covered to death and isn’t the part that bothered me, relatively speaking. No, what bothers me the most is what came afterward.

See, Anastasia is puking-on-the-sidewalk, passing-out drunk. It’s very clearly the point where someone needs to pour her into a cab and send her home, which none of her friends are doing. Instead, the Jacob expy—who for the purposes of this commentary shall be Captain Nice Guy—has decided to make his move, trying to slide into Drunk Ana’s DMs like “yah.”

This is—rightly—portrayed as supremely creepy. Dude’s trying to take advantage of the fact that Ana’s incapacitated. Cool, I’m with you thus far, movie. Good on you for making him out to be a creeper. But then they go and ruin it by letting Christian Grey be even creepier. Christian, having stalked her to the bar, now assaults Captain Nice Guy for the crime of, well, basically trying to claim Christian’s property while Ana sits by, passively. It’s like watching two dogs having a pissing contest over a particularly drunk fire hydrant.

So having rescued her from creepy guy, Christian decides he needs to take care of her and make sure she’s safe. Now he doesn’t take her to her roommate and say, “Hey, Anastasia’s doing badly, you should take her home.” In fact, Christian has specifically brought his brother along as his wingman to the bar and uses him to distract Ana’s friends.

Nor does he take her home himself, something he could easily have done; if he can find her at a random bar in Vancouver, he can find her apartment, tuck her into bed, turn her on her side to make sure she doesn’t aspirate on her own vomit and leave some OJ and Advil on the nightstand.

No, he takes her back to his hotel room.

Here’s the part that bothers me: Nobody objects to this.

The fact that Christian Grey brings an unconscious woman back to his room is completely unremarked upon by anyone. He carried Anastasia—who is dead to the world—through the front door, past the front desk, through the lobby and into the elevator. And nobody, not the doorman, not the staff, not the guests, nobody said a damn thing about it.

Now in any place, people would notice this shit. This is not something you expect to see in a hotel lobby. In the real world, people would react to this; there would be comments, there would be whispers and pointing, people would be coming up to know if she was OK, folks would be filming it to be put on YouTube alternately laughing at the drunk coed or overlaying it with “Love Lifts Us Up Where We Belong.” And that’s for a normal, unknown person. Not a wealthy billionaire. Not someone who’s paparazzi bait.

Let’s be clear here: Christian Grey is the richest man in the Pacific Northwest. He’s no recluse; he’s, at the very least, Richard Branson-level famous. People know who he is and what he looks like. He’s notorious for having never had a publicly acknowledged relationship with anyone. And here he is, bringing an unconscious college student back to his room like he’s bringing back a pizza.

In any other world, this would be huge. TMZ and Perez Hilton would lose their shit over this. Jezebel would have at least three articles in the span of 15 minutes going over grainy YouTube footage. Newspapers would be hounding Grey Industry’s PR team for comments. This would be trending on Twitter. Facebook would be flooded with people sharing the cameraphone snaps. There would be constant comparisons to Rehtaeh Parsons and Steubenville.

But not in this movie. In this movie, a rich, powerful man taking an unconscious young girl back to his room, undressing her, and sleeping in the same bed with her is sweet. It’s romantic. It shows how much he cares for her. This isn’t taking advantage of someone who’s incapacitated by alcohol; this is the beginnings of true love. And somehow everyone in town recognizes this and discreetly gives the happy couple their privacy because yeah. Even Ana’s friends don’t care that Anastasia disappeared from the bar without a word.

I want to point out: When other students at Steubenville were asked about the sexual assault, they insisted they didn’t even know it was rape. She didn’t say no. She wasn’t struggling. She was just being manhandled like a side of beef by the popular kids.

Like Anastasia Steele. Being dragged around by Christian Grey.

It’s such a minor thing, compared to all the more overt abuse that Christian pulls, but it’s all the more insidious because of it.