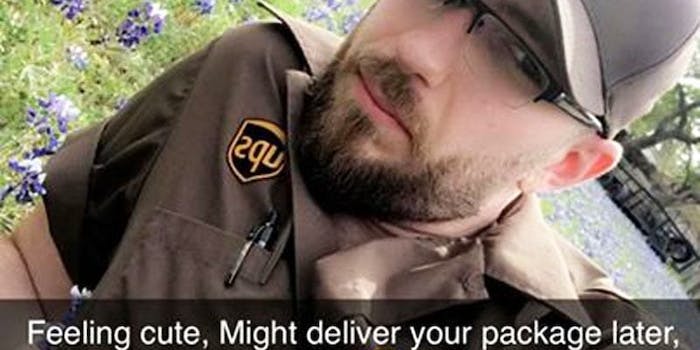 There's nothing 'cute' about these memes.

“Feeling cute, might delete later” has become the premiere tongue-in-cheek way of captioning a self-indulgent selfie, despite the fact that the meme originated two years ago as a joke. In January 2017, Twitter user @PapaCone_ tweeted the below illustration of Squidward from SpongeBob SquarePants taking a selfie with the caption “might delete soon but I felt cute in this pic,” and—as they say—the rest is history. (Indeed, even this author isn’t immune to the charms of the “Feeling Cute Challenge.”)

What is the Feeling Cute Challenge?

The meme continued to build steam when a Columbus Water Works employee posted a since-deleted (but preserved on Instagram) selfie with the caption: “Feeling cute. Might cut your water off later…idk.”

From there, the door opened for a whole new host of memes that became known as the “Feeling Cute Challenge.” As you can see from a handful of examples below, the challenge consists of people mostly posting photos from their jobs on Twitter, including street workers, Air Force personnel, and park rangers. The Feeling Cute Challenge even spread to The Office memes.

The website America’s Police Problem blew the story open, reporting on dozens of specific examples from correctional officers across the country posting so-called “jokes” about using excessive force, planting drugs, or even leaving inmates in the shower for hours at a time:

In one of the screenshot going viral, Correctional Officer at Wheeler Correctional Facility, Amelia Icesis Commodore, stated that she may put peoples baby daddy in the shower for hours.

Ke’Nya Hill, from the same facility, uploaded a picture stating that she felt cute and may shoot someones baby daddy.

Sallie Rosalie Harris works for Warren County Regional Jail and felt cute enough to write that she may find drugs on someones baby mama that is hers.

The Washington Post later picked up on the story and reached out to prison officials from Texas, Georgia, and Oklahoma, who all said they were aware of the posts and were looking into them:

“A handful of correctional officers employed by this agency are under investigation for on- and off-duty conduct violations as a result of the alleged posting of inappropriate photographs on social media,” said Jeremy Desel, a spokesperson from the Texas Department of Criminal Justice.

He added: “These officers in no way represent the thousands of TDCJ employees who go to work every day taking public safety seriously in all ways. If any of these allegations prove correct then swift disciplinary action as severe as termination of involved employees will occur.”

Most of the posts have since been taken down, and it’s only a matter of time before the participating officers face disciplinary action—or lose their jobs.

I hope they're still "Feeling Cute" on the Unemployment Line.American Corrections Officers, Police Officers and…

Posted by 100000 Black Men Against Tommy Sotomayor & For A Progressive BLK Community on Monday, April 15, 2019

The Facebook page “100000 Black Men Against Tommy Sotomayor & For A Progressive BLK Community” perhaps offered the best response to the scandal in a post that stated, “I hope they’re still ‘feeling cute’ on the unemployment line.”