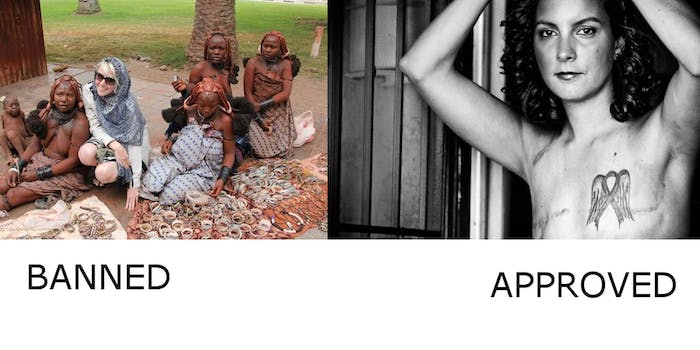 Be warned: This is not, substantially speaking, different from its former policy.

Following a sustained public discussion about Facebook‘s double standards regarding its content policy and violence against women, the company landed in another pile of dog doo for censoring breast cancer survivor photos. A Change.org petition asking Facebook to end the practice of banning mastectomy photos for “nudity” recently garnered more than 21,000 signatures.

And Facebook listened, just as it did regarding gender-based hate speech. While Facebook’s actual policy regarding the photos does not appear to have changed, a new addition to its FAQ expressly states that it will allow mastectomy photos to appear on the website.

We agree that undergoing a mastectomy is a life-changing experience and that sharing photos can help raise awareness about breast cancer and support the men and women facing a diagnosis, undergoing treatment, or living with the scars of cancer. The vast majority of these kinds of photos are compliant with our policies.

However, photos with fully exposed breasts, particularly if they’re unaffected by surgery, do violate Facebook’s Terms. These policies are based on the same standards which apply to television and print media, and that govern sites with a significant number of young people.

This is not, substantially speaking, different from its former policy regarding the photos, according to a statement Facebook’s policy team gave VentureBeat:

We have long allowed mastectomy photos to be shared on Facebook, as well as educational and scientific photos of the human body and photos of women breastfeeding. We only review or remove photos after they have been reported to us by people who see the images in their News Feeds or otherwise discover them. On occasion, we may remove a photo showing mastectomy scarring either by mistake, as our teams review millions of pieces of content daily, or because a photo has violated our terms for other reasons. As a reminder, our terms stipulate that we generally do not allow nudity, with some exceptions as laid out above and here, consistent with other platforms that have many young users.

So what’s the difference? Basically, carefulness and a level of personal attention. The creator of the Change.org petition, Scorchy Barrington, declared “Victory” after meeting with Facebook officials. “Facebook’s policy team told me they are committed to clearing up any internal or external confusion regarding images of mastectomy and have clarified their policy,” the cancer survivor wrote in an update to the petition.

The move is similar to Facebook’s response after a similar Change.org petition asked it to alter its content policy to allow photos of breastfeeding mothers. Facebook listened and created a new FAQ item specifying that breastfeeding photos did not violate their content policies.

It’s important to note that the common denominator of censorship across the board are “fully exposed breasts,” regardless of the context. This is a distinction that recently led one Facebook user to receive a 30-day suspension after she published photos of a recent trip to Namibia. In a rant about Facebook’s content policy that has received over 40,000 reblogs on Tumblr in two days, Victoria Champagne declared the practice to be hypocritical and anti-feminist:

[A]re people in western culture just SO brainwashed by patriarchy they can’t STAND to see women who live differently? Are we just so fucking offended that we need to deem these women as dirty, sexual, pornographical, vulgar? Are people on facebook just THAT ignorant about the rest of the world, where they feel the need to report something because they don’t understand it? These women are doing nothing wrong. They’re simply just living their every day life, like you or I would. Yet facebook is literally PUNISHING me for posting a photo with them.

Champagne pointed out the double standards that seem to apply to Facebook’s content policy as it’s currently practiced:

Facebook has renewed and expanded its commitment to cleaning up many of the items Champagne notes—particularly the ones inciting violence against women.

But while breast cancer survivors and advocates for awareness are celebrating their victory, it looks like Facebook’s policy regarding exposed breasts is here to stay.