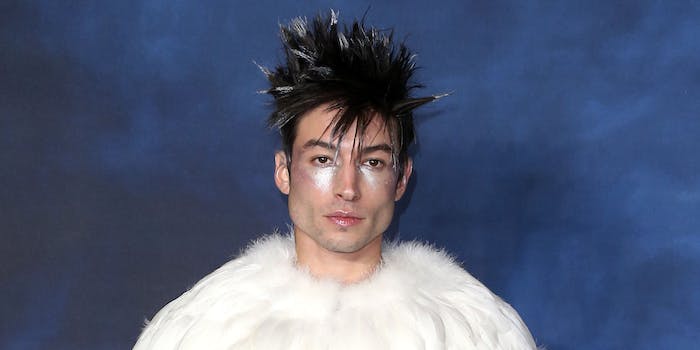 ‘I filmed myself when I get assaulted for NFT crypto art’: Police body-cam footage from Ezra Miller’s Hawaii arrest released

Footage from Ezra Miller’s first arrest in Hawaii for disorderly conduct and harassment back in March was released on Wednesday, revealing the extent of Miller’s interactions with local police.

The video, which was published by TMZ, shows an unidentified man (whose identity is blurred) who says that Miller got in his face during a dart game and spit in his face for no reason. Once the police start talking to Miller, Miller said that they were assaulted in the bar and offered to show police the video. They also tied filming themself being assaulted in a bar in the name of NFTs and asked a police officer for a name and badge number.

“Assaulted in this bar twice in a row,” Miller said. “I filmed myself when I get assaulted for NFT crypto art. What’s your name? What’s your badge number?”

After Miller is placed in handcuffs and is arrested for disorderly conduct, they addressed a female police officer (whose camera captured the incident) and said, “I was assaulted, you understand that, right?”

They apologized to the police and started to explain what happened in the bar again.

“Guy in the bar declared himself a Nazi,” they explained. “I have it on film and he attacked me.”

As police removed jewelry from Miller (including a Flash ring), Miller claimed their fourth amendment rights and objected when police started to search them. Miller also said that police touched them inappropriately and that they did not want a male police officer to search them because they are transgender and non-binary.

While the video brought around similar jokes as Miller’s second arrest in April, some people also zeroed in on Miller’s comments about turning video of themself getting assaulted into NFT crypto art—both as something strange and as something insignificant amid Miller’s claims that they were assaulted.

“Ezra Miller films themselves when they get assaulted to make NFTs out of the footage? That’s kinda metal,” tweeted @Pollos_Hernandy.

After the arrest, Miller was released on bail. They were arrested again a few weeks later on charges of second-degree assault.