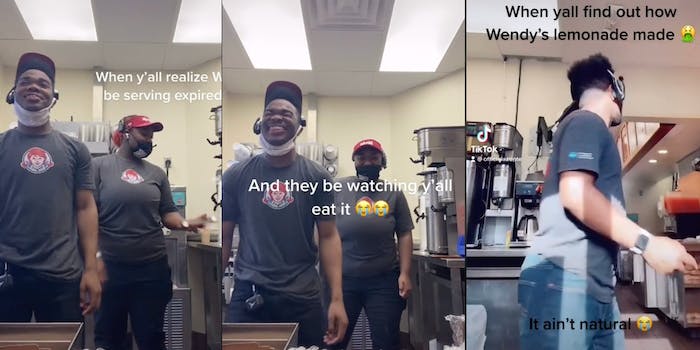 “cresh, never frozen”? The last part might be true, but according to one viral TikTok, Wendy’s burgers might not be as fresh as it says.

Posted by user Azonte Berry or @officialazonte, the TikTok has 2.6 million views and 588,000 likes. In it, Berry and a co-worker allege that “Wendy’s be serving expired meat and they be watching y’all eat it.”

“I’ll never eat at tht mf unless i see it cooked,” he wrote in the caption.

Viewers agreed, bringing up their less-than-savory experiences with Wendy’s and feeling vindicated by Berry’s TikTok.

“This is why i got food poisoning and never ate there again,” one person commented

“that’s why my tummy be hurtin,” a complaint read

“That’s why the food be tasting off,” another wrote.

People claiming to be fellow Wendy’s workers in the comments had mixed reactions to the video. Some shared that they had also used expired meat before, while others said it’s an anomaly.

“I WORK AT WENDYS I CONFIRM THIS,” one viewer affirmed. Another simply wrote, “I can confirm.”

One alleged worker got more graphic saying, “ We really do… somebody was in grill saying the meat looked old and green and the manager said cook it anyway.”

“Not my wendy’s, y’all stay safe doe,” one person refuted.

“I worked at wendy’s and we never did that y’all just… different,” another worker claimed.

The TikTok didn’t turn off everyone, though. Many viewers didn’t really care. Those folks chimed in under the video, saying they’d continue to eat at the fast-food chain.

“It still be bussing tho and ima continue to eat it cause it’s my favorite,” one fan wrote.

“Got to see it through Wendy 444 is honestly one of the best meal i ever had,” another commented.

Berry also responded to a comment from one person raving about Wendy’s lemonade, telling them to stop drinking it. He posted another video warning customers about the drink but gave no krther explanation beyond, “It ain’t natural.”

One commenter who appears to be a former employee said that the lemonade is “dish water.”

Some folks expressed concern over the Wendy’s employees’ jobs, but Berry reassured everyone that he wouldn’t get fired. Why?

“We both have quit,” he wrote.

The Daily Dot reached out to Wendy’s for comment.