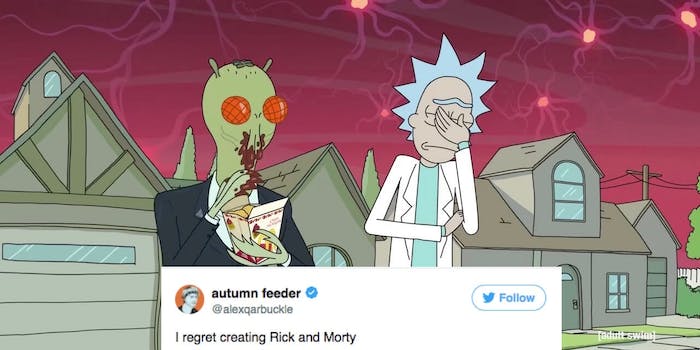 Image via Rick and Morty

The best ‘Rick and Morty’ memes from the Szechuan sauce fiasco

Things got ugly, but at least they also got funny.

Over the weekend, McDonald’s ran a limited promotion bringing back its discontinued Szechuan dipping sauce, a product that returned to the public consciousness after being featured in the popular cartoon Rick and Morty. Some of Rick and Morty’s hardcore fans are probably pretty cool, but as a group they have a reputation for being dickheads and fancying themselves intellectuals. When McDonald’s didn’t release enough sauce to satisfying the slavering horde, the shit predictably hit the fandom. Let’s take a look at the aftermath of Saucegate, or whatever history will end up calling this disaster.

In 2017, it is impossible to just enjoy a funny cartoon show without something like this happening:

Even if this was a joke or a spoof of what this person thinks Rick and Morty fans are like, it inconvenienced the McDonald’s employees and other customers as much as the real thing. And the truth is, there are hundreds of sincerely aggrieved Rick and Morty fans flipping out on Reddit and Twitter because they didn’t get the sauce they wanted.

McDonald’s has apologized for the limited quantity, but that wasn’t good enough for the toxic part of the fandom.

And if a fellow fan suggests the sauce-wanters are overreacting, it gets even worse. Check out this Reddit thread, pointed out by the A.V. Club, where a fan received death threats:

Elsewhere, fans are threatening to boycott or even sue McDonald’s, for all the good that will do.

It got so bad that someone changed his Twitter display name to “Rick and Morty creator” and threatened to shut the show down because of its immature fans:

In light of recent events, I’ve made the decision to delete Rick & Morty. Thanks and love to all the fans for three incredible seasons.

I regret creating Rick and Morty

I cannot emphasize this enough: I created the show Rick & Morty and tomorrow I am going to destroy it by putting it in a river.

I brought R&M to the river and a gull took it. It’s the gull’s show now. I’m done. Thanks to everyone, especially exec producer Jeff Dahmer.

A lot of the responses are in on the joke, but some are genuinely angry Rick and Morty fans who don’t want the show to be drowned in a river. To be completely clear, Twitter user @alexqarbuckle is not the creator of the television program Rick and Morty, which was co-created by Justin Roiland and Dan Harmon.

Criticism of Rick and Morty fans has become as easy as shooting sentient pickles in a barrel. One of the most popular forms is a joke that suggests “who gets a special sauce for their McNuggets” is pretty low on the list of things worth caring about. Couldn’t Rick’s quest be for something more worthwhile instead?

Rick and Morty season dedicated to Rick demanding McDonalds get guns out of America next, please.

Another popular joke is editing the official McDonald’s statement to scorn the obsessed fans who waited in line for hours to have a chance at the sauce:

The most ironic, saddest part of all of this is that the ‘smart’ fans who identify with the character of Rick, a depressed and dissatisfied genius with a hole inside him that can never be filled, are missing the point. The sauce was just a joke by Justin Roiland about the totally arbitrary nature of Rick’s adventures. McDonald’s was just clever enough to turn it into a promotion.

Sadly, the creators of the show have once again been forced to disavow their fans:

FYI: We had nothing to do with this McDonald's stuff. Not happy w/how this was handled. Please be cool to the employees it's not their fault

Not cool, Rick! Not cool!