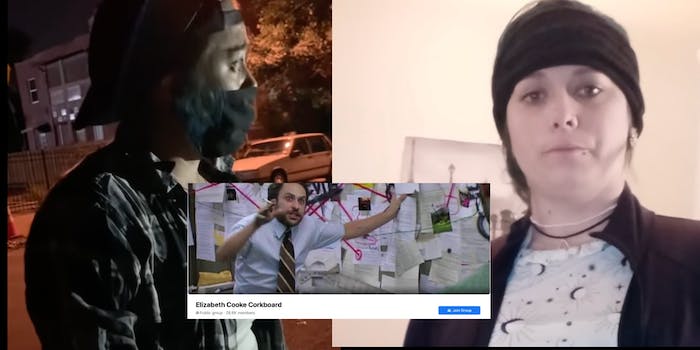 A crusade to expose a car thief has turned into an online sleuthing community.

Social media users are enthralled with a story about a St. Louis car thief, concerning death, and the cellphone that revealed it all.

A video showing an attempted car thief, identified as Elizabeth Cooke, is where all of this started. The man filming the attempted burglary found her cell phone in his car after he and others, possibly neighbors, chased her off the job. After gaining access to the phone and all of her social media accounts with it, the man flooded her Facebook page with screenshots of conversations revolving around possible crimes, drugs, and the curious death of a man who had supposedly signed over power of attorney to Cooke days before he died.

The man who found the phone has not been identified, but according to the Riverfront Times, Cooke attempted to steal his car on Aug. 4. When she was caught, she reportedly told him that a friend gave her permission to borrow his car and began apologizing if it was not in fact her “friend’s car.” In the video, the man filming notes that his steering column has been “popped,” and that Cooke has belongings in his vehicle.

Over the next several days, using the phone and the belongings Cooke left in his vehicle, the unidentified man shared details of previous possible car thefts, storage unit burglaries, and even reunited some stolen credit cards and other items with their owners.

Cooke’s Facebook page is no longer available, but according to the Times, the owner of the car she’d attempted to steal had changed her profile settings to include that she “works at stealing,” and added a parenthetical “(car thief)” to the end of her name. One TikTok user uploaded a screenshot of the profile before it was taken down.

The phone was turned over to police after Cooke reported it stolen, according to the Times, but the information shared from it online has gone on to viral fame, inspiring an “Elizabeth Cooke Corkboard” Facebook group cataloging the information and piecing things together. The group has grown to include over 27,000 members who are attempting to solve mysterious thefts and other crimes in the St. Louis area using the details from Cooke’s phone and social media accounts.

In particular, commenters seem fixated with a particular relationship between Cooke and a man named Bobby Phillips, who had been recently released from prison after 43 years when they met. They became friends in late December 2020. While staying with Cooke, documents from her phone are alleged to show that Phillips signed over his power of attorney days before dying on Jan. 1, 2021. Cooke had photos of his birth certificate, driver’s license, social security card, and the document showing his power of attorney being transferred to her. She was also the sole beneficiary in his will.

Phillips death was ruled an accident, and KMOV4 reported it was caused from “underlying heart conditions being exacerbated by methamphetamines.” However, that hasn’t stopped amateur internet sleuths from further investigating his death. Facebook group members have been following the saga, as new information is added by other members.

“The whole thing is wild and catches your attention,” wrote Andy Monaco of the situation. “It’s entertaining in a fucked up way.”

Another commenter shared that a similar situation— someone getting people to include them in their will before they mysteriously died— had happened to someone they knew, and that in their experience it would be difficult to prove.

“Even if she gets tied to Bobby’s death I bet it will be really hard to prove,” group member Molly Gotobed wrote. “I had a friend that was doing that to people so he could rob them but the cops couldn’t arrest him because they couldn’t prove it and the gal [whose] family tried to press charges were never able to do so.”

Cooke was arrested on an unrelated charge in Illinois on Aug. 11 and has been in jail since then. The Times reports that she is aware of the social media posts, but not the extent of her virality.

The Daily Dot has reached out to the group’s administrators regarding the group’s popularity. Cooke could not be reached for comment.