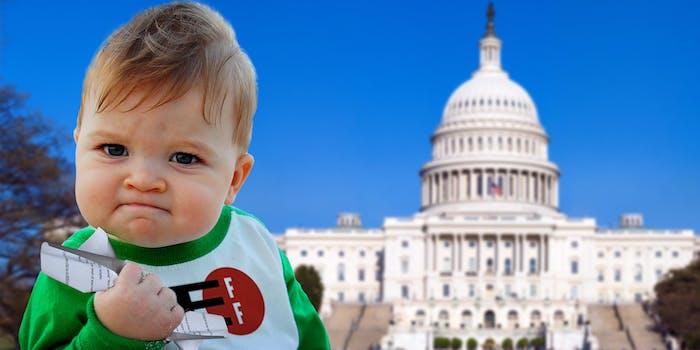 The Foreign Intelligence Surveillance Court has agreed to disclose an earlier ruling that some NSA spying is unconstitutional.

With all the public revelations surrounding the NSA’s electronic spying programs, one story may provide some with a sense that the secrecy is not impenetrable and the deck is not stacked completely against the public.

“The secret court today granted a motion filed by EFF related to an ongoing Freedom of Information Act lawsuit,” wrote the EFF’s Mark Rumold on the organization’s Deep Links blog. “The FISC gave its OK to the public disclosure of an earlier opinion of the FISC—an opinion that declared aspects of the NSA’s surveillance under Section 702 of the FISA Amendments Act to be unconstitutional.”

Despite the Department of Justice’s argument that the FISC’s very rules prohibit disclosure, FISC disagreed.

“In short,” Rumold told the Daily Dot, “the ruling means this: The executive branch can’t try to blame the FISC for withholding the opinions from the public. The government had tried to argue that the FISC’s procedural rules were the reason they couldn’t disclose the opinion (which held that surveillance conducted under Section 702 had violated the 4th Amendment). The FISC disagreed and said that it’s the executive branch’s classification that is holding back disclosure.”

“But, with that argument gone,” he wrote, “DOJ should have no choice but to release, at the very minimum, parts of the opinion describing the government’s unconstitutional practices.”

With the spate of leaks on the NSA’s programs via former Booz Allen analyst Edward Snowden, interest in clarification of the FISC’s activities has mounted. Today a bipartisan group of Senators announced legislation that would compel the Attorney General to declassify significant FISC opinions.

This ruling may prove to be a milepost in the drive to push back the creeping secrecy that has come to characterize the Obama administration. A recent survey by the Pew Research Center indicates that most Americans are OK with the trade-off of supposed security for very real sacrifices of civil liberties. But a Guardian poll also indicates that two-thirds of Americans want greater oversight of the NSA.

The American Congress may be facing an uncharacteristic moment of leadership. Even if it is a matter of leading U.S. law away from a secrecy for which it is largely responsible.