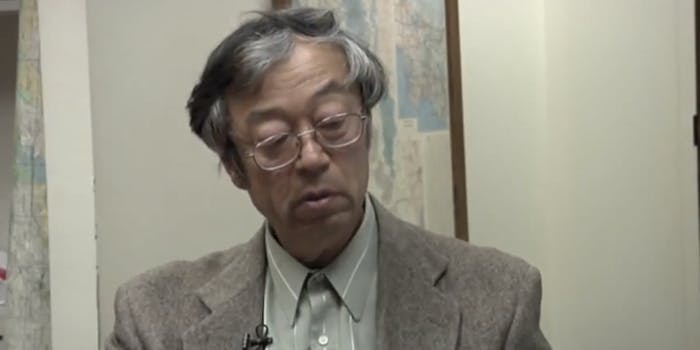 Alleged Bitcoin inventor says he doesn’t know anything about ‘Bitcorn’

Either Newsweek screwed the pooch, or this Satoshi is an amazing actor.

The world has spent more than 24 hours gawking at the biggest media he-said-she-said in Bitcoin‘s history, centered on the true identity of founder Satoshi Nakamoto. Now you can judge for yourself.

Newsweek identified 64-year-old Japanese-American Dorian S. Nakamoto as Satoshi, noting it had been his birth name before changing it decades ago. But the Associated Press got an exclusive sit-down with Dorian, a former systems engineer who’s worked on classified defense projects, and released an excerpt from that video late Thursday evening. He denies it completely.

Given the depth of the actual Satoshi mystery (is the real “Satoshi Nakamoto” a pseudonym? Is his name a clue or just a common Japanese name?)—it would only be a mild surprise if it turns out Dorian’s denial is an elaborate, Kaiser Soze-level scheme to deflect attention now that he’s been found out.

On the other hand, just look at that dismissal, where Dorian says of Newsweek reporter Leah McGrath Goodman: “Leah wrote all this? Psh.” He also bungles the pronunciation of Bitcoin, calling it “Bitcorn,” before adding “I never communicated with bitcoins.” Hardly sounds like this Nakamoto even knows he’s even talking about.

If it’is an elaborate ruse, Satoshi can add “convincing and completely ballsy actor” to his already-impressive resume.