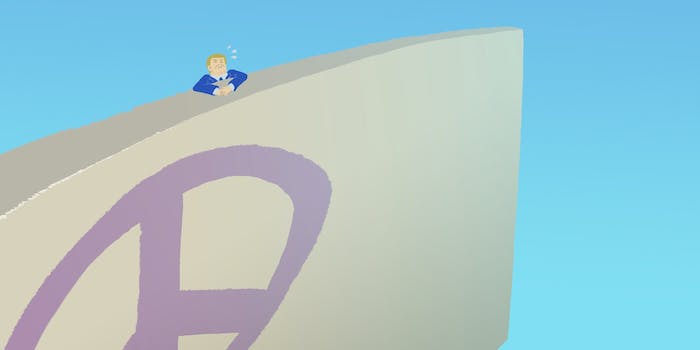 Donald Trump is seeking the wall of his dreams

Making America Great Again, one missed connection at a time.

The next day, the following post appeared in Craigslist’s Missed Connections section.*

Seeking the wall of my dreams – m4wall (America)

I saw you last night. I wasn’t sure if it you were real or if you were a beautiful vision sent to me from God, who wrote the Bible, which is my favorite book of all time, which I enjoy even more than my own best-selling books, which are the best, but still I prefer the Bible because God, who is a close personal friend of mine, is one class act.

You were a perfect wall. Straddling the border between the United States and Mexico. Using your broad, powerful shoulders to keep the Mexicans out of this great nation, stopping them from stealing our jobs and raping our women.

I’m the Republican at the top of the polls, the center of the debate stage, the host of the highest-rated episode of Saturday Night Live in years.

I’m not just looking for a short-term fling. I’m want a real, lasting relationship. If you’ll have me, I’d like for you to take my last name. I want to see “Trump” in giant gold letters emblazoned on both of your sides. People across this great nation—and also across the other nation to our south, which is less great, but it’s fine, whatever, they should still be allowed to view the wall—will look at these big, beautiful letters and think to themselves, “wow, whoever put his name on this wall is in no way compensating for any feelings of inadequacy, especially toward his father, who built a real estate empire from nothing, and that he himself could never hope to achieve anything as truly meaningful as that coming from a place of extreme, almost unimaginable, privilege.”

I don’t care that there are people who say you’re unnecessary. They’re losers jealous of everything you will theoretically be able to accomplish. So what if a recent study from the Pew Research Center shows that, between 2009 and 2014, there was actually a negative flow of Mexican immigrants into the Unites States, rendering much of the concern about Mexican immigration ridiculous.

To me, you’ll always be absolutely necessary. Without a wall, Wildlings and Brown Walkers will storm across this great country with impunity.

And don’t listen to those people who say you’re too expensive. Money should be no object where something as perfect as you is concerned. So what if it’ll cost tens of billions of dollars to build you? I’ll force Mexico to pay for the construction. How? I’m a great negotiator. Not only can I complain about things until I get my way, but I can also manipulate my negotiating opponents into doing what I want them to do with my patented Trump Mind Games. (Patent pending.)

I’ll just have my assistant tell the president of Mexico—whose name I refuse to say because this is America, speak English—that I never shake hands with anyone. And then I’ll shake his hand, which will make him so flattered that he’ll happily offer billions of dollars to build something that’s a direct insult to the people of his country. I’ve done it before, I’ll do it again.

I think we could have a life together, but I have to be honest—that life would be a nontraditional one. See, I’m also perusing a relationship with a centralized database tracking all of America’s Muslims. The database would be linked to the special ID cards all Muslims would be required to carry.

It’s not that I don’t love you. It just that I also love the database. I have friends at IBM—very good company, very classy. They made a similar database of religious minorities for Germany back in the 1940s.

I don’t know if you’re reading this, but, if you are, please send me an email. I’ve humped a lot of walls before, but never one as attractive as you. I’m super into it.

*Actually, it didn’t. This is satire.