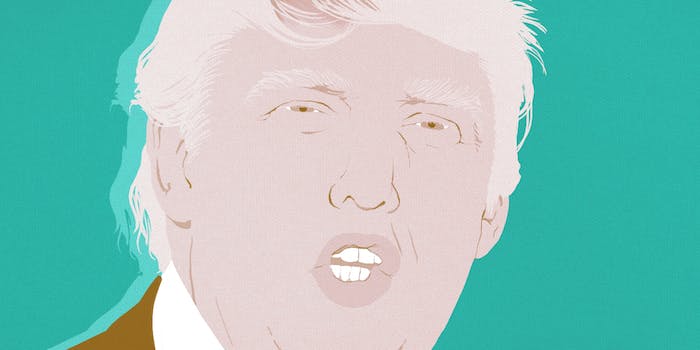 Donald Trump is an anti-immigrant loudmouth—but he's in good company.

If anything was made clear by last night’s Republican presidential debate, the first of the 2016 campaign season, it’s that billionaire businessman (and major-league Twitter troll) Donald Trump has the conservative establishment all shook up.

It wasn’t just apparent in the aggressive questions from Fox News’ trio of moderators—in a debate chock-full of questionable statements from other candidates that went unchallenged. While Jeb Bush got to tiptoe around a question about his opposition to his brother’s invasion of Iraq, Trump’s assertion that he had “evidence” that Mexico’s government was sending over illegal immigrants was fiercely challenged by Chris Wallace. From the get-go, Fox News set out to make Trump appear to be an outlier within the party—a liberal in sheep’s clothing and a misogynist blowhard all at once.

It was an understandable tack for Fox News to take, as they’ve got no interest in the Republican primary process being a cakewalk for such a supremely unelectable man. But despite what they might like you believe, Donald Trump isn’t a glitch.

Trump is, in many ways, the modern Republican Party’s not-so-new normal. If you examine some of the biggest areas of contention and controversy that have arisen through Trump’s ego-driven campaign, you quickly start to realize that he’s not some renegade who’s smearing the good name of the GOP. Many of his stated policy views, and even some of his impolitic ravings, are pretty much in the party’s wheelhouse.

When it comes to immigration, for example, Trump supports the construction of an enormous wall between the United States and Mexico. The fact that he’s framed the need for this barrier in the most inflammatory terms possible—to keep out the “criminals” and “rapists” he insists (with no stated evidence) are being sent by the Mexican government—might make you squeamish, no doubt.

But appeals to racist panic aren’t that hard to find within the GOP, especially as it relates to Latino immigration. Back in 2013, Congressman Steve King (R-Iowa) warned of cantaloupe-calved immigrants crossing the border illegally, smuggling “75 pounds of marijuana across the desert.” And if you’re looking for a more current example, presidential candidate Gov. Bobby Jindal (R-La.) let this gem drop during Fox News’ second-tier warmup debate yesterday: “Immigration without assimilation is an invasion.”

Needless to say, using the word “invasion” to describe immigrants who retain and acknowledge aspects of their native culture is very inflammatory, echoing the language of some of the worst elements of the xenophobic right. As if to make the point clearer, Jindal added: “I’m tired of the hyphenated Americans and the division.” It may not be calling Mexican immigrants rapists, sure, but it’s nonetheless a hugely presumptive, offensive attitude towards other people’s deeply held cultural identities. It’s one thing to believe in assimilation and walk that path yourself. It’s quite another to excoriate those who don’t.

And besides, it’s not just about tone, it’s about policy. Whatever vulgarities Trump wants to spout about Latino immigrants, if his end conclusion is to “build a fence”—just like Ted Cruz (R-Texas), Marco Rubio (R-Fla.), John Kasich (R-Ohio), and a host of other elected Republicans—how much does it truly matter? Trump may be a boor, but a politely framed 2,000+ mile border fence is no better than a rude one.

Similarly, look at health care. This is an area where conservatives might have reason to look askance at Trump, and liberals might feel reason to cheer. More than a decade ago, Donald Trump did indeed support a single-payer health care system, and as recently as last month, he reiterated that he was “a conservative with a heart” and that you “have to take care of poor people.”

However, that’s very completely different from any policies he’s actually proposing. When asked about his past support for single-payer at the debate, he insisted that it could’ve worked in a different time—and that it works in some other places like Scotland—but he wants a privately run system.. And what big idea did he float as an alternative? Allowing people to buy health insurance across state lines, which (paired with tort reform) seems to account for most of the GOP’s health care ideas over the last several years.

In fact, the Republicans can’t even claim that Trump’s wishy-washy past health care stances are all that unprecedented. Lest we forget, the logic behind the individual mandate was essentially borne from the Heritage Foundation, a conservative think-tank, in the 1990s. And in 2012, the GOP nominated a candidate, Mitt Romney, who was more compromised in this area than anyone could claim Trump to be, having ushered in Romneycare while he was Massachusetts’ governor. Trump and Romney are also similar in that they’ve claimed to shift from pro-choice to pro-life.

Many of his stated policy views, and even some of his impolitic ravings, are pretty much in the party’s wheelhouse.

Looking at raw, unrealistic bombast? Trump may take home the trophy there, by virtue of his gruff style and genuine disregard for tact. But is claiming he’d somehow force Mexico to finance a border fence really anymore detached from reality than former Arkansas governor Mike Huckabee’s comment about Social Security? He argued that “illegals, prostitutes, pimps, [and] drug dealers” are “free-loading off the system,” and if he were elected, he would force them to pay more into entitlement programs, as if that would somehow solve the issue.

However, you don’t have to look so deeply into candidates’ policy proposals to see that Trump isn’t that different from his peers. Trump, as everyone should know, is basically the most famous birther on the planet. His short-lived 2012 pseudo-campaign was built primarily on stoking shameful, racist suspicion about President Obama‘s citizenship. It was practically a dry run for an Orly Taitz presidential campaign, minus her dulcet Moldovan accent.

But Trump isn’t even alone in that regard. Back in 2011, Rick Perry seemingly came out of a dinner with Trump doubting whether Obama’s birth certificate was authentic, and Huckabee has something of a dog-whistle history on the issue. Whether or not there was any sincerity behind it, even Romney cracked a birther joke during his 2012 campaign. Call me old fashioned, but laughing with racist conspiracy theorists, rather than at them, isn’t exactly model behavior.

Simply put, anything troubling that you think Trump might say, believe, or do, you can probably find a pretty decent comparison within other corners of the Republican Party. And that’s a reality that the GOP is hoping people don’t realize. Trump may be a sensationalist demagogue, sure, but those aren’t in short supply these days.