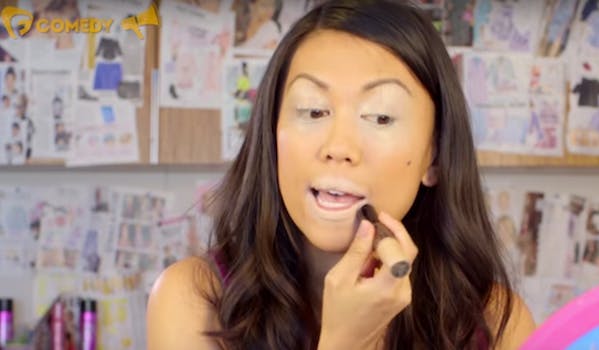 You just need Cheetos and goggles.

Whether we like it or not, we’ve had to see Donald Trump‘s face so often that it is now likely seared into our brains. We’ve had to think about him having lips for eyes. He’s made us envision other terrifying parts of his body.

It’s time to take the power back. And now we can, thanks to this beautiful makeup tutorial.

Actress Tess Paras, who tackled typecasting in Hollywood with a “Royals” cover two years ago, has introduced a new makeup technique: Trumping. The step-by-step tutorial covers exactly how to make your face look like Trump’s, from the oddly chalky lips (“You know you’re done when it looks basically like a chapped anus”) to picking the right bronzer (“You don’t want it to be tan or brown because then somebody’s going to ask for your birth certificate”). For the final touch, you just need some Cheetos.