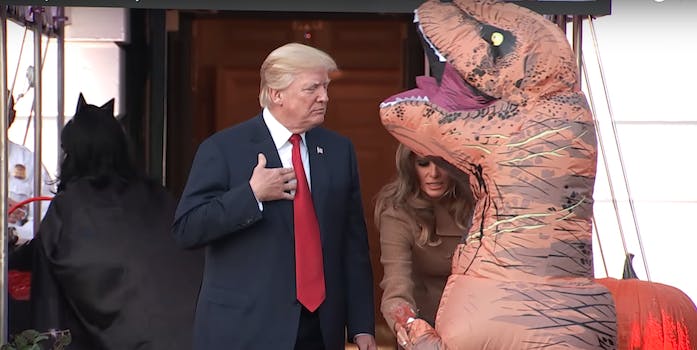 This little dinosaur got its candy, but not a warm greeting from the POTUS.

On Oct. 30, Donald Trump and First Lady Melania Trump handed out candy to a line of trick-or-treaters who showed up at the White House. Although all the kids got their treats, not everyone was greeted warmly by the president. In particular, one kid dressed as a dinosaur seemed to get the cold shoulder. While all the other boys and ghouls were given smiles, handshakes, and friendly hellos, Trump chose to awkwardly play with his lapels when an inflatable T-rex walked by.

The president couldn’t have snubbed this kid any harder if he was Melania swatting away an unwanted hand or a Polish first lady dodging a handshake.

This was in direct contrast to the long interaction Trump had with a kid who decided to show up as the perfect metaphor for the future of the United States, a skeleton in a “Make America Great Again” hat.

But don’t worry too much about our dinosaur friend. Not only were they one of the fiercest predators of the Cretaceous, Melania also made sure they got their candy. In fact, the first lady seemed pretty impressed by the costume.

As they’re both creatures who’ve been mocked for their small hands, you’d think the president would have had a little more empathy for the Tyrannosaurus who showed at his doorstep. Unfortunately, that wasn’t the case.