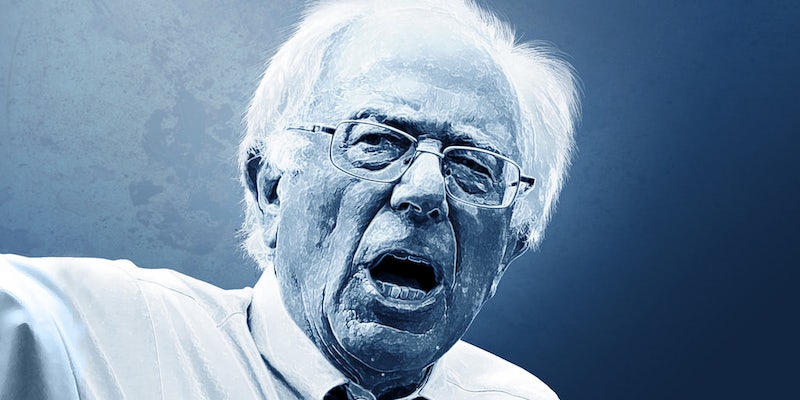 Donald Trump isn't the maverick you're looking for. That man is Bernie Sanders.

If you’re not a Republican, chances are that you already dislike Donald Trump. Indeed, the two most recent polls assessing his support among Democrats and Independents revealed remarkably similar figures about the Donald, with Quinnipiac University and CBS News both placing his unfavorability rating at 56 percent among Independents and 83 percent among Democrats. Even Republicans aren’t solidly behind him, as his unfavorability rating within that group fluctuated between 33 and 37 percent.

That said, as anyone who has discussed politics with friends or family members over the past couple months can confirm, Trump remains surprisingly popular among voters who are looking for an “outsider” to become president. Less than a week ago, I discussed the 2016 election with an apolitical-bordering-on-apathetic friend. Although she claims to have no interest in casting a ballot, she noted that she admired Trump for being (yes) an “outsider,” one who is “principled” and wouldn’t be afraid to “shake things up”—that is, if he were elected. It’s a familiar refrain—just Google “Donald Trump” and “outsider” for an indication.

Candidates say they will 'Change Washington' & come from Washington. #DonaldTrump has struck a chord as he's a legit outsider. Very worrying

Donald Trump has one major advantage, he is projecting himself as "outsider" who hasn't got dirty in politics.

You may not like Donald Trump but a business outsider like him is the answer to stopping a self-serving and out of control U.S. Government

But for voters like my friend, who are looking for a “principled outsider who will shake things up,” the candidate they’re looking for isn’t a reality TV star and CEO turned political troll. Instead, potential Donald Trump voters should take a good look at Bernie Sanders.

The origins of Trump’s current appeal seem to stem from his complete lack of a filter and avowed opposition to “political correctness.” From his campaign against illegal immigration to insulting critics like Sen. John McCain (R-Ariz.) and Fox News reporter Megyn Kelly, Trump has created the illusion that his ability to stir up controversy constitutes a courageous willingness to speak truth to power.

There’s a major problem with this assumption: Trump isn’t standing up to power, he is the power. As Sen. Rand Paul (R-Ky.) argued in an interview with BuzzFeed: “Trump’s trying to run as an outsider and a truth teller, when in reality he’s the consummate insider.”

Paul is right: Trump’s father, Fred, was a real estate developer in New York City, and Trump joined his father’s business after graduating from the Wharton School of Business at the University of Pennsylvania. Before his passing in 1999, Trump Sr. reportedly earned $250 to $300 million over the course of his 79-year real estate career. Trump would later take over his father’s mantle as president of Trump Management Co. in 1974, at the ripe old age of 28.

There’s a major problem with this assumption: Trump isn’t standing up to power, he is the power.

Thus, it’s hard to argue with the fact that Donald Trump hit the proverbial jackpot when it comes to starting his life with massive social and economic advantages over his fellow 300 million Americans. While Trump’s faux populism has, thus far, gone over well among right-wingers, his attacks on Latinos and women aren’t an instance of punching up the mighty and affluent—it’s yet another case of a one-percenter reinforcing the status quo.

Now contrast this with Sanders’ message. Denouncing America’s existing campaign financing system as “legalized bribery,” Sanders has advocated for public funding for political elections. As he explained during a political rally last week, “we’re going to introduce legislation which will allow people to run for office without having to beg money from the wealthy and the powerful.”

In addition, Sanders has called for a constitutional amendment to overturn the Supreme Court’s 2010 ruling in Citizens United, which he argues has exacerbated our “oligarchy where big money is buying politicians.”

When it comes to being an “outsider” who will “shake things up,” these two proposals alone count for more than all of Trump’s campaign rhetoric (which focus more on attacking women and disenfranchised groups than proposing concrete policies). After all, if the goal is to make Washington less beholden to special interests, the only surefire way to do this is to remove the financial obstacles that make it impossible to wield real power without having a huge bank account.

Donald Trump isn’t criticizing that system: He’s a product of it. If Trump hadn’t been born into a family of millionaires, he wouldn’t be able to fund his own presidential campaign. Instead, he would be forced to beg for donations from wealthy individuals and political action committees like the other candidates.

His attacks on Latinos and women aren’t an instance of punching up the mighty and affluent—it’s yet another case of a one-percenter reinforcing the status quo.

If the goal is to promote a political culture that doesn’t limit access to mainstream politicians and their stand-by donors, then the true trailblazer is Sanders, who has refused to tap into PACs or SuperPACs; instead, he financed his campaign entirely from individual donations on his website. This method has already allowed more than 300,000 individuals to contribute to his campaign—with an average donation of $31 per person.

Whether or not you think Sanders should be our next president, voters who want to support an outsider need to understand what that term actually means. Although Trump has proved himself rather adept at making controversial comments, that doesn’t make him a reformer or any kind of a visionary. A true outsider is someone who strives to effect permanent changes that will fix a broken system of American politics. If American voters are fed up with a divided Congress that can’t get anything accomplished and a government they feel doesn’t represent their interests, they shouldn’t blow it up by electing Trump. They should help transform it.

Donald Trump isn’t the maverick you’re looking for. If you want a Republican who is willing to step outside party lines, you’re better off casting your vote for someone like Sen. Ted Cruz (R-Texas), a Tea Party favorite willing to incur the wrath of GOP leadership, or Gov. John Kasich (R-Ohio), who defended his expansion of Medicaid during last week’s debates. Or there’s former Hewlett-Packard CEO Carly Fiorina, who has similar credentials to Trump but far fewer downsides.

But if you really want a principled outsider who speaks his mind and will shake things up, look no further than the Independent from Vermont—who so believes he can the Red States that he’s making Republican voters a major target of his campaign.

After all, his grassroots success has already shocked the Democratic party. He may just end up surprising all of us.