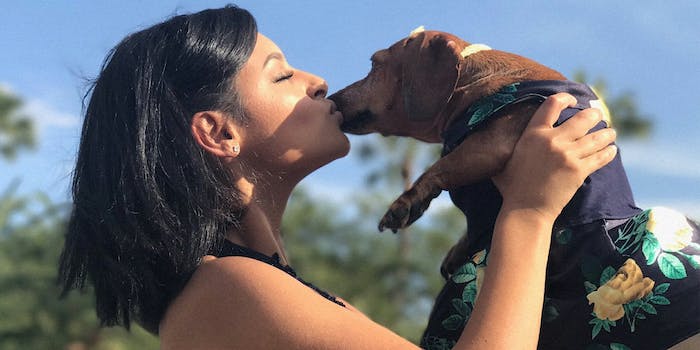 Dog gets matching dress and goes to people prom

Prom is a huge deal when you’re in high school, and picking out the perfect dress can be a nightmare. It has to look great, but also make a statement. That’s why girl’s have gone to prom dressed in things like Taco Bell wrappers and old math homework (although technically that one was for graduation).

Most importantly, it has to fit perfectly. Often girls end up getting their dresses altered before the big night. But what do you do with the leftover material? Well, if you’re eighteen-year-old Brenda Cross, you use it to make a second dress for your best friend. Of course it helps that her best friend is a tiny dachshund named Sasha.

“Sasha is my best friend―basically like a daughter to me,” Cross told HuffPost. “I wanted to share that moment with her, as well as every other big moment in my life!”

Cross posted pictures to Twitter of her and her two dates, and the tweet already has over 15,000 retweets and 50,000 likes.

Sasha is apparently pleased with all the attention.

Sasha is happy with all the love and attention! #Prom #GetSashaOnEllen 😂❤️ pic.twitter.com/BkH3l9cTJV

Cross is also using her moment of viral fame to help out her boyfriend, a transgender teen looking to get surgery to get a masectomy.

While I still have all this attention Ima go ahead and share my boyfriend's surgery gofundme 😊https://t.co/TWDXiLDUAM

Those wishing to help can do so on the boy’s GoFundMe page.