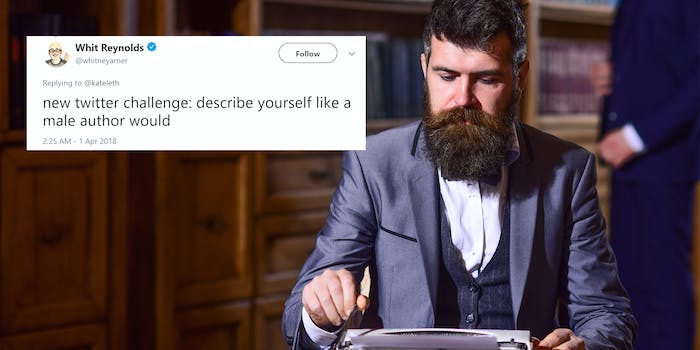 This Twitter thread had a lot of great responses.

Taking a screengrab of a section in a book and posting it on Twitter has become a common way to point out problematic sentences in literature. It’s what sparked the Ready Player One backlash. Now people—mainly women—are taking that criticism a step further by writing parodies of how a male author would describe them.

It all started last week when writer Gwen C. Katz tweeted a cringe-inducing passage from a male author. This is how he wrote from a woman’s perspective: “I sauntered over, certain he noticed me. I’m hard to miss, I’d like to think—a little tall (but not too tall), a nice set of curves if I do say so myself, pants so impossibly tight that if I had had a credit card in my back pocket you could read the expiration date. The rest of my outfit wasn’t that remarkable, just a few old things I had lying around. You know how it is.”

A male author is insisting that he is living proof that it's possible for a male author to write an authentic female protagonist.

Here's a quote from his first page. pic.twitter.com/f6d5bN2EHq

That’s exactly how all women think, right?? Yeah, not even close. The man in question was apparently trying to prove that men can write from a woman’s perspective in fiction. Katz followed up with a tweet saying that she thinks men “can absolutely write realistic female narrators.” But, clearly, this author needed some feedback from actual women.

But if you dismiss out of hand the value of personal experience by proclaiming that your writing proves it isn't necessary, then you haven't done it.

The author’s passage was mocked on Twitter over the weekend. And that’s when Whit Reynolds decided to come up with a Twitter challenge: “describe yourself like a male author would.”

The tweet went viral as many women wrote funny descriptions of themselves to mimic the way that the male author described his protagonist.

She was forty but could have passed for a year younger with soft lipstick and some gentle mascara. Her dress clung to the curves of her bosom which was cupped by her bra that was under it, but over the breasts that were naked inside her clothes. She had a personality and eyes. https://t.co/o9UJ5QcrQM

I had big honking teeters, just enormous bosoms, and I thought about them constantly as I walked down the street, using my legs (thick, with big shapely calves), but never not thinking about my enormo honkers, https://t.co/UaCQBchchL

She smiled, but I could see the sadness in her exotic almond-shaped eyes. Her scarf was made of light cotton, but the weight of oppression that came with it kept her head bowed in submission. I dreamed about ripping it off, letting her dark hair tumble free over her booby breasts https://t.co/gV4J3rfwXy

“Ni hao!!” I yelled at the slight girl across the street; she whipped around, glaring at me with exotic almond eyes as I called to her in the unmistakable voice of her ancestors. https://t.co/8jVCl7mfon

As she moved her strong cocoa body gleamed as if calling to the country of Africa. Her chocolate waist moved like an alluring siren calling me to crash on the rocks of her brown buttocks. https://t.co/eY08cAprM1

Her body was an hourglass meant for taking his time, but her mohawk concerned him. She had a lesbian look, & too many tattoos, in languages he couldn't pronounce. Still, she'd written a stack of books. It was time for him to weigh in with his high school knowledge of Beowulf. https://t.co/26HNfX7n6Q

Hopefully, the man in question (and other authors) learned from this Twitter thread what not to do when describing a woman in fiction. As writer Kate Leth said in a tweet, don’t be scared about writing female characters, just “treat us like people.”