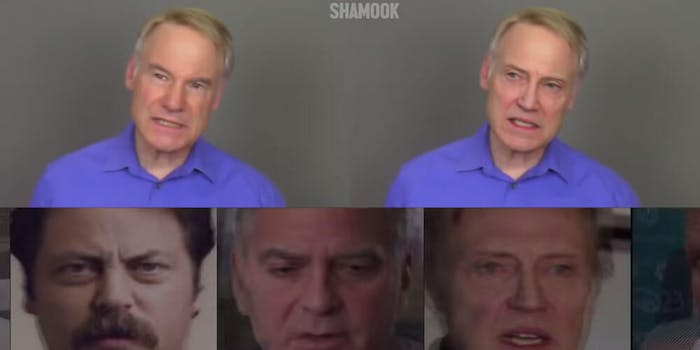 A new video shows actor and impressionist Jim Meskimen transforming into 20 celebrities thanks to deepfake technology.

In the video, developed by deepfake creator Sham00k, Meskimen can be seen reciting a poem titled “Pity the Poor Impressionist” while taking on the faces of the celebrities he impersonates.

Meskimen’s impressions include everyone from Hollywood A-listers Robert Deniro, Tommy Lee Jones, and George Clooney to comedic icons such as Robin Williams and Nick Offerman.

The video was created with open-source software known as DeepFaceLab, which uses machine learning to replace someone’s face with another’s. Sham00k spent more than 250 hours on the project and fed the software over 1,200 hours of video and 300,000 images of the 20 celebrities.

A separate video uploaded by Sham00k also shows a behind the scenes look at how the deepfake process works.

Speaking with the Daily Dot, Sham00k stated that although other deepfake creators have digitally morphed impressionists into their subjects, every previous video used footage that wasn’t originally filmed for a deepfake.

For example, one of the most popular celebrity impression deepfakes shows comedian Bill Hader turning into Arnold Schwarzenegger during a 2014 interview with late-night talk show host Conan O’Brien.

Instead of using already available footage, Sham00k reached out to Meskimen and asked him to create a video of impressions solely for the purpose of being deepfaked.

“I wanted to do something different from the other deepfake content creators, most of them are using existing footage of impersonations,” Sham00k said. “I thought the best way to create something that stands out more was to go right to the source.”

Sham00k’s says Meskimen readily agreed to the video after seeing a sample of his work.

“He was 100% up for it from the get go,” Sham00k added. “I sent him a small ‘demo’ using some existing footage of his impressions from YouTube and he was fascinated and more than up for working with me.”

The video comes amid growing concern from the U.S. government and others that deepfake technology could be used to spread disinformation and even disrupt a democratic election. Despite the fervor, however, a recent study found that 96% of all deepfakes online are related to nonconsensual pornography and not politics.

Although the public focus on deepfakes is often on their potential for harm, Sham00k and other creators show that the technology can be used for anything from comedy to movies and even education.