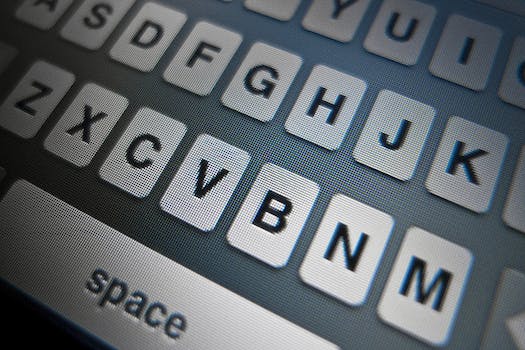 Dot Dot Dot: Your keyboard just might change the world

What if you could type twice as fast on your phone?

It would change the nature of capitalism and democracy.

Personally, I type about one-third the speed with my thumbs as I do on my desktop. That means I can move quickly enough on my phone that I don’t mind writing a tweet or a relatively short email or having a text conversation—some of the time. (My mom types on her iPhone with one index finger and writes texts that are small novellas. I am horrified at the thought of how long that must take her. Sorry, mom.)

Anything beyond that, however, I just will not do on my phone.

Earlier this week, a project appeared on Indiegogo raising money for a reimagined phone keyboard, one that would help you type dramatically faster with just your thumbs.

The project is called Minuum, and it replaces your phone’s usual keyboard with a minimal strip of clustered letters. The grouping mimics the qwerty keyboard you’re already familiar with, so you just mash the clusters as fast as you can and the computer figures out what you probably mean as you go. If there’s any ambiguity, it gives you a couple of choices that you can pick between with a quick tap.

When the web community got going, it was strictly a witch-in-the-wardrobe situation. You had to go to your big (ugly) desktop, wait for dial-up, and then navigate by, I don’t know, whatever Prodigy felt you should see. You didn’t take the Internet with you, it sat in the corner of your office or bedroom, and it stayed there.

Today, the Web is seeping into everything, everywhere. It’s already on our phones, but it’s the readers’ digest version. Projects like Minuum tell us: not for long. Right now, my phone is my secondary experience of the Internet, and it’s competing with my desktop. When I can type on my phone as fast as on my desktop, then it won’t be much of a horse race; the phone will leave the computer in the dust.

The Minuum project also showcases how much business is being changed by the Internet community. There certainly was some truth to the old myth that two guys in a garage could put Microsoft out of business. Sergei Brinn and Larry Page were those guys, but they still needed a venture capitalist to write them a check for a hundred grand to get their business started.

The advent of crowdfunding changes all that. Now, three guys who’ve reinvented the keyboard can throw up a page on Indiegogo and anyone with 5 bucks can help get them started. You, too, can be a VC, if you’ve got a fiver to spare. All of a sudden, the line between capital and labor—to put it in Marxist terms—is an order of magnitude more blurry than ever before.

If the Internet makes it possible for anyone to help supply capital, the Internet also dramatically reduces the capital needs of a new company or product. Whether it’s company chatrooms, reducing or eliminating office rent, or Web 2.0 tools like Expensify that make various back office functions a cheap trick, the Internet drastically reduces start up costs—meaning that not only can you support a new business with just $5, but also that $5 is a more meaningful contribution than it used to be.

In the Internet Age, we are all bourgeoisie.

Already, I live a large portion of my life online. What happens when my fullest and primary experience of the Internet shifts to the thing that lies within 3 feet of me every minute of every day?

The history of writing is the history of western political development. The Hebrews invented the alphabet, the Greeks added vowels. An alphabet dramatically expanded the group of people who could consume and distribute information—as opposed to, say, pictograms, which took years to learn and were therefore relegated to a highly specialized class of scribes. That expansion led to the first democracy.

The printing press again dramatically expanded the production and consumption of information, leading to the development of representative government, democracy at scale—democracy as we have known it for the last 400 years.

Already, the Internet has disrupted that world order. The TEA party, Occupy, the Arab Spring, all began online. When anyone can write a manifesto on her phone and transmit it around the world… Well, let’s put it this way, farmers in rural China don’t have computers, but they do have smartphones.

And while that may sound like the end of history, it’s also just the beginning. The Minuum project is working on ways that wiggling your arm would let you type on your watch.

Capitalism and little-ell liberal government are probably the two greatest humanitarian inventions in the history of humankind. Projects like Minuum demonstrate just how much the Internet is fundamentally changing both.