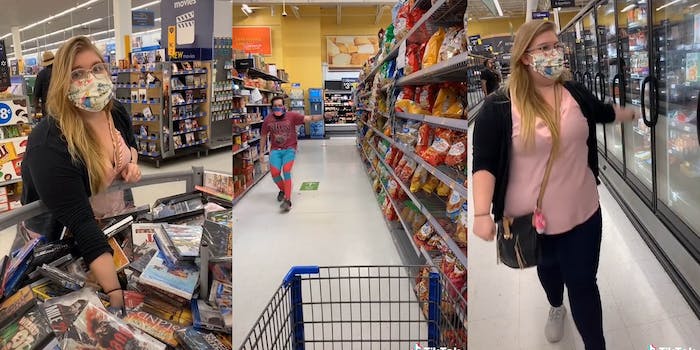 Spice up date night with this couple’s viral TikTok game

A fun date night is only a Walmart trip away.

We’ve reached week “who even knows anymore” of quarantine, and it’s becoming increasingly difficult to find ways to stay entertained. The concept of “date night” is especially amorphous nowadays; people who are locked up with their significant other can probably attest that binging Netflix and eating whatever fried thing is taking up space in their freezer has begun to lose its luster. Thankfully, one couple recently provided a cure for the common date night in a viral TikTok video.

The video comes courtesy of Luke Merren (@medical_advice on TikTok) and features his fiancee, Ally Mackie. The betrothed couple lives in Tallahassee, Florida, and they proved that a spontaneous date night is only one Walmart trip away. In his TikTok, Merren and Mackie both fish through bargain bins or run up and down the aisles of their local Walmart until the other person yells “stop.” At that point, they’ve got to put whatever item they’ve landed on in their shopping cart.

The result was a solid movie and a junk food spread fit for royalty. Merren and Mackie walked out of Walmart with a copy of Stephen Chbosky’s acclaimed 2017 drama Wonder on DVD, along with a bag of sour cream and onion chips, Unicorn Sparkle ice cream, a thin-crust spinach Alfredo pizza, mini corn dogs, and a case of lime White Claws.

You can tell both partners are skeptical about certain selections—Merren lets out a bemused sigh when Mackie picks up the ice cream—but that’s part of the fun of the game.

“We anticipated landing on some things we didn’t like, but we didn’t cheat and pick again,” Merren told BuzzFeed. (The couple only passed on a family-sized box of frozen chimichangas in the interest of not being wasteful.) “We definitely would not have chosen the Alfredo thin crust pizza, but now it’s one of our new favorites!”

Merren’s date night video has earned an astounding 1.8 million views on TikTok, along with 147,000 likes and over 3,000 comments. From the looks of the comments, lots of other couples are eager to play the date night game themselves, though one commenter offered a grave warning: “Be careful with that unicorn sparkle ice cream. Be prepared for unnatural forest green poop.”