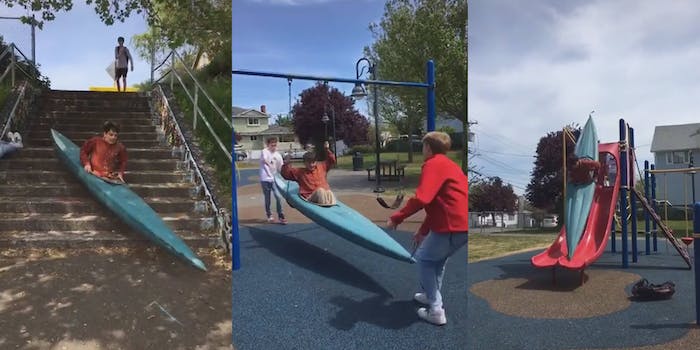 TikTok loves these 3 kids who kayak down concrete stairs

Because 2019 has been a year, and Gen Z is over it, the latest Tik Tok trend is… hurdling down concrete stairs in a kayak.

Three boys filmed themselves kayaking down some stairs, attempting to swing in their kayak, and kayaking down a slide. The energy of this TikTok is, in one word, chaotic. The poster’s handle is @juulgamer69. There is a flute in the back squeakily playing “My Heart Will Go On.” We don’t know where the kayak came from, or how long it will last.

The TikTok, titled “kayak gang’ has 1.2 million likes and counting and has been shared 117,000 thousand times. The account seems to be run by the three boys in the video, but they appear to be new to TikTok, with only three other videos on their page.

We have yet to see copycat videos, perhaps because of the difficulties securing a kayak and getting it to a park.

Maybe the boys are trying to see how fast they can fly down the stairs. Maybe they’re practicing for when climate change floods the coasts. Who knows. But viewers are eagerly waiting to see if this trend catches on.