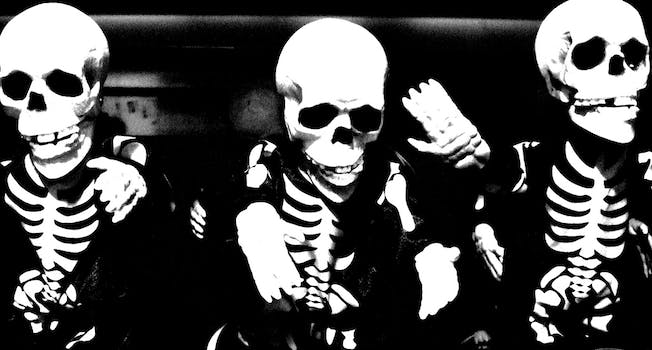 Here’s how to tell if your Halloween costume is offensive

Is your Halloween costume worth someone else’s pain? I was unexpectedly faced with that question last week when I was searching for last-minute materials for an idea so perfect I couldn’t believe I hadn’t already thought of it: “Werewolf Bar Mitzvah.” 30 Rock fans are likely very familiar with Tracy Jordan’s “Monster Mash”-esque novelty track, introduced in the show’s second season. Produced by Childish Gambino’s Donald Glover, who served as a writer on the show, the parody tune is an ode to “boys becoming men/men becoming wolves.”

There’s just one problem with ideas: What’s hilarious and amazing in your head doesn’t always work out in real life. At a Halloween store in Lower Manhattan, I asked an attendant where I could find a yarmulke, explaining the concept to him. “Nice,” he laughed. “Very offensive.” He meant the remark as a compliment—because after all, the customer is always right—but I couldn’t get it out of my head. I consulted a friend: Was my costume in bad taste? Or worse: Was it anti-Semitic? He assured me it probably was neither (it’s about 30 Rock, not Jewish people), but deep down, I already knew the answer.

While trying not to offend other people might seem complicated, it’s actually very simple to know whether you’re causing harm. Follow the Golden Rules: 1) If you have to ask yourself if something is offensive, it probably is. 2) And if you find yourself explaining why something isn’t offensive (e.g. “it’s a reference to a TV show!”), it definitely is.

What’s of particular note about the Kenworthy case is that he clearly knew that his costume choice would prove controversial—and did it anyway. It’s similar to Julianne Hough’s apology following her now infamous Orange Is the New Black costume in 2013. The Dancing with the Stars alum caused widespread Internet outrage after donning blackface to dress as “Crazy Eyes,” and Hough responded to the controversy by saying: “It certainly was never my intention to be disrespectful or demeaning to anyone in any way.”

But Jezebel’s Callie Beusman called B.S. on Julianne Hough’s “sorry, didn’t know!” explanation. “You wore blackface—which has historically been used to disrespect and demean black people for centuries, which was quite literally invented as a method of disrespecting and demeaning black people— but had no intention of being disrespectful or demeaning to anyone in any way,” Beusman wrote. “OH, OKAY.” And since 2013, numerous controversies involving Katy Perry, Miley Cyrus, and other celebrities accused of crossing a line have only brought cultural appropriation to a wider audience. If it was hard to use the ignorance argument two years ago, it’s even harder now.

While trying not to offend other people might seem complicated, it’s actually very simple to know whether you’re causing harm.

Of course, there’s a simple reason that people like Hough and Kenworthy are able to brush aside questions of offense to begin with—being able to pretend not to see race is a function of privilege. While the experiences of cultural appropriation and minstrelsy (e.g., racial performance as entertainment) might be very real for the people whose Halloween costumes depict, these issues don’t affect them personally, which makes them easy to dismiss. It’s easy to brush aside questions of harm to others if you don’t have to think about them 364 days of the year.

This is about more than simply “checking your privilege,” as goes the popular Tumblr mantra when dealing with racism, sexism, or any other social justice issue. We need to ask ourselves why it’s so important to cling to our ideas—even when we know they’re problematic and incorrect—than it is to stop ourselves from causing harm to begin with. After all, the makers of the Caitlyn Jenner Halloween costume knew that it would cause a stir in the transgender community, just as the people behind a costume of Bill Cosby raping someone understood the reaction it would engender on social media.

But in checking our privilege, we should also ask why that privilege—and our right to be an a-hole—is more important to us than respecting other people. It’s because empathy is hard: It’s easy to dismiss the feelings of others as an overreaction or the product of a society that’s “too PC.” It’s even easier to slap a cute emoticon behind it and remind us how much fun we’re all having. And it’s easiest of all to pretend you just didn’t know. You might get to have your “perfect” costume for Halloween, but as Kenworthy found out, it might not have been so awesome to begin with.