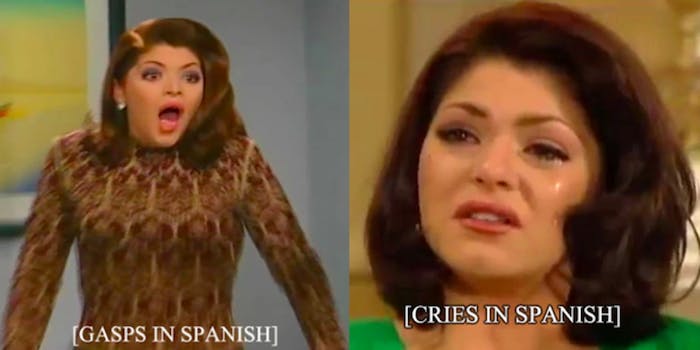 It’s likely that you’ve come across Soraya Montenegro one way or another while cruising the Internet. With her always-perfect eyebrows and full, luxurious hair, she’s a face you wouldn’t forget. Perhaps she popped up “crying in Spanish,” helping to illustrate someone’s feelings.

The video of her screaming at her wheelchair-bound stepdaughter Alicia is a staple on Tumblr, with over half a million notes. Or maybe you saw her and Planned Parenthood bid Carly Fiorina adieu on Twitter when the Hewlett-Packard flop pulled out of the presidential race.

No matter where Soraya appears, you just really get what she’s feeling.

But before Soraya existed as a meme, she was the theatrical, violent antagonist on Mexican telenovela María la del Barrio as portrayed by Itatí Cantoral in the ’90s. The show only lasted for a year with 90 episodes, but Soraya undoubtedly made a mark. Her insanity and ridiculousness have proven timeless, resurrected on the Internet a decade later.

Soraya’s initial foray into the interwebs as viral gold was the aforementioned explosive encounter with her stepdaughter. In the telenovela (remember, it’s a telenovela, so it has to be extremely dramatic), she marries Alicia’s father with the goal of killing him and inheriting his money. Soraya’s still crazy in love with her ex-husband (not the man she murders), whose son, Nandito, falls for Alicia.

When Soraya walks in on Nandito kissing Alicia, she blows a gasket and screams the now iconic “maldita lisiada!” which translates to “damn crippled!” The frantic woman proceeds to fight literally everyone who gets in her way, even knocking Alicia out of her wheelchair, causing a maid to pass out, and stabbing Nandito with a pair of scissors.

The scene nabbed Soraya an entry in Know Your Meme, but that was just the beginning of her reign as telenovela meme queen. More recently, other screencaps of her from various moments on María la del Barrio have been floating around on the Internet. These images depict her doing something dramatic like crying or staring, but with “in Spanish” added to the caption. One of the most popular screenshots is “gasps in Spanish,” which is from when she walks in on Alicia and Nadito’s G-rated love.

“I think, on the one hand, it reduces Latino experience to a novela where something’s so dramatic,” said Alex Alvarez, New Formats Editor at mitú, a media brand for Latino youth focused on creating content that’s unapologetically Latino, but with universal appeal. “On the other hand, it speaks to the power of this particular meme, that it’s something cross-cultural and you can see it and know it’s Latino, and even if you’re not Latino you can recognize it.”

Cristian Vazquez, an 18-year-old from Danbury, Connecticut, is the teen who helped catapult Soraya to viral fame by posting screenshots and videos of her on Tumblr. He used to watch the telenovela as a kid while at a babysitter’s house, but began to rewatch the series on YouTube last year and capture images that he captioned himself.

“I first saw a picture with the same caption of another actress, Victoria Ruffo, and then thought it would be funny to do the same—and I was not expecting the amount of attention it would soon get. Then, along the way, I created others of Soraya,” Vazquez told the Daily Dot in an email. “After posting the first photo of Soraya ‘crying in spanish,’ it became very popular because of a video of her acting in the telenovela ‘Maria La Del Barrio,’ in which she, the villain, tries to kill three people. The majority of the people on Tumblr have never seen a telenovela and are not familiar with the exaggerated acting style, and so they found it hilarious.”

Vazquez posted a few GIFs of Soraya on Tumblr before the video of her infamous “maldita lisiada” rumble. The images got some meager attention, but the scene is what really resonated with people. It has almost 550,000 notes. One Tumblr user wrote in his reblog, “I literally don’t speak Spanish but this was a wild trip.”

The comment speaks to the effectiveness of Soraya’s outrageous behavior in this moment—the emotion and meaning transcend language. This devious telenovela character’s success as a meme is twofold: It’s enjoyable for people who might recognize the clip as a telenovela or at least vaguely understand understand what’s going on, and it’s also shareable for people who are unfamiliar with both the genre and language—simply due to the absurdity.

Telenovelas aren’t the only soap operas to catch the attention of the Internet. Indian serials have also become popular in online culture, with their extravagant or magnified zooms and stylized transitions. One scene from Hindi-language soap opera Bade Achhe Lagte Hain, featuring a squad of disapproving family members, was captioned with “when ur about to roast someone” and has made its way through thousands of Tumblr users’ dashboards.

While the United States has its own slew of soap operas, including All My Children and General Hospital, these series haven’t seen the type of social network crossover that foreign ones have. Perhaps it’s because the English-speaking series don’t reach the same levels of preposterous action. It’s possible, too, that people familiar with shows like María la del Barrio and Bade Achhe Lagte Hain are sharing these sorts of posts because it’s the first time they’re seeing something from their own childhoods in a space like Tumblr—and they want to acknowledge the higher-level of ridiculousness of these soaps.

As for those unfamiliar with both the culture and language, the unfamiliarity is perhaps part of the drive to full memehood. These scenes aren’t exactly lost in translation, but the inability to fully comprehend the actual dialogue or every little detail supplies enough mystery and intrigue to persuade the viewer to share it.

Not long after posting the fight video, Vazquez shared the Soraya “cries in Spanish” screencap, which comes from a scene where our sweet Soraya is slapped by an older man, which starts the waterworks. Then her bruja maid pulls a knife out and tries to stab the guy.

“People reacted very quickly, and it was soon reaching thousands and thousands of notes, which I was quite surprised at,” Vazquez says. “I think it got so big because of people being able to relate, being bilingual as I am myself, and also applying different captions to it.”

And so began the memeification of the phrase “in Spanish.” There’s so much more than just crying, gasping, and staring. How about plotting some murder in Spanish, among other things?

Obviously, you can’t actually do something non-verbal “in Spanish,” and the ethos behind the screencaps isn’t a disparaging one. The ludicrousness that fuels Soraya and telenovelas is also what makes these screencaps work for both Latinos and non-Latinos.

Alvarez believes that people want to use the meme because it communicates a sense of the dramatic—she likened it to the ideas of the ugly cry or the pretty cry. But it’s also exciting to see something from Latino culture getting some time in the online spotlight.

“It’s a great example of Latino influence on mainstream pop culture and that we are mainstream, there’s more and more of us,” she said. “It’s kind of nice and sort of different to see us spearheading a meme and it being so quintessentially us.”

The television screencap has seen a Renaissance as of late, thanks to platforms like Tumblr. Jon Christian at the Atlantic in his piece “The Great and Terrible Rise of Screencaps” examines this phenomenon and writes that “ubiquity embodies everything great and everything troubling about pop-culture in the Internet age—an age where fan passions and remix culture clash with traditional ideas of intellectual property, authenticity, and linear storytelling.”

But the Soraya screencaps are elevated all the way to meme level, heightened by the power of over-the-top telenovela narrative. And people are inserting these captions themselves, recontextualizing the scene in a comedic manner that subverts our expectations of clarifying text. And while Christian writes about the dangers of falsified screencaps, the Soraya screencaps are in no way untrue. They’re simply amplified, just like Soraya and the world of telenovelas.

It’s also safe to say that although Soraya aided in the popularity of “doing things in Spanish,” she’s not always vital to the meme. Vazquez captioned another character on the telenovela with “gets shot in Spanish,” a joke that has skyrocketed to over 700,000 notes. But it’s important to point out that those numbers spiked in part due to the “Mmm Whatcha Say” meme. Someone who reblogged “gets shot in Spanish” added the caption “Mmm qué dices,” which references a meme derived from The O.C., adding another layer of Internet buzziness (and outsized TV drama).

Soraya has become a full-fledged meme herself, not always needing the “In Spanish” caption to supplement the scenario. Sometimes her bye-bitch mentality and WTF moments speak on their own. Like when she popped into a Planned Parenthood tweet.

Farewell to @CarlyFiorina. It turns out you can’t flat-out lie to the American people about Planned Parenthood. pic.twitter.com/13TxefxnV2

No matter where Soraya ends up, she’s indicative of an online landscape that is accepting of interesting and entertaining content no matter what its language or culture of origin. A landscape of Latinos and Spanish-speakers helping to create and share these sorts of memes.

“It spreads from this small community that has an inside joke and it definitely starts within a smaller community and then branches out,” Alvarez said.

While Soraya might have died on María la del Barrio decades ago (twice, if you count the her first fake death where she fell out of a window only to recover and plot her revenge), her viral fame in the Internet age proves that it’s possible for any piece of pop culture to have its comeback. And between her frenzied fights and catastrophic meltdowns, Soraya has taught us that practically everything is funnier when done in Spanish.