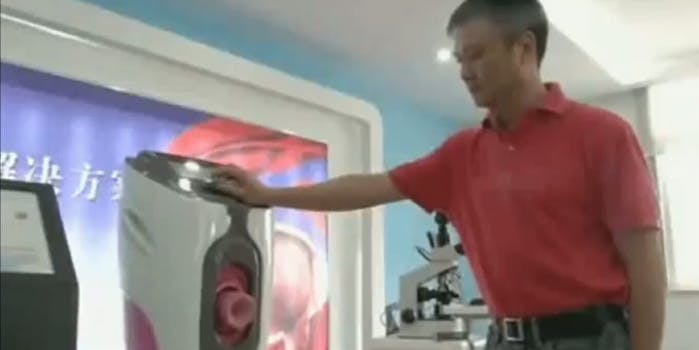 People have thoughts about this sperm extraction machine for anxious donors

A Chinese hospital is reportedly employing the use of high-tech machines to ease the process for sperm donors and infertility patients. The machines made headlines for obvious reasons back in 2012 when they were originally developed. The internet has changed a lot since then.

Pictures of the “sperm extractor”—a white and grey machine complete with a small, rhythmically thrusting attachment—showed back up online this week and quickly went viral. People don’t know how to feel about a machine specially made to jerk men off, but they have plenty to say about it.

The speed, height, temperature, and frequency can all be adjusted to suit each patient. Predictably, people online had sperm extraction jokes, um, locked and loaded.

“Mississippi man gets married to a robotic sperm extractor” https://t.co/F6QtqiXqx1

uh i’m sorry but sperm extractor was my nickname in high school is someone paying me royalties https://t.co/oBYBp936NP

No shit I was called a sperm extractor on XBox live once https://t.co/ipDGPM3jBj

“And when you’re a star, you can do it… Grab ‘em right by the [Automatic Sperm Extractor]!” pic.twitter.com/YmOtK3vukG

Fun nicknames for your SO: automatic sperm extractor

Some people had some very valid concerns, like how the machine gets cleaned between donors.

women and girls can’t have free sanitary products but men can get pulled off in public? foh. https://t.co/X2UCxURCXk

The machines debuted Zhengzhou Central Hospital in China back in 2012. They made their Twitter meme debut on Monday.