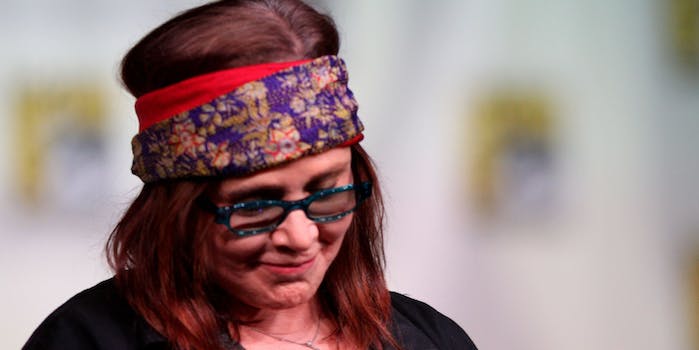 Carrie Fisher will be remembered as a Star Wars heroine, a funny and fearless writer, an advocate for mental health, and a great dog mom. She lived an eventful life, and she shared it with the world. Next to these many contributions, a Twitter account hardly rates as significant—but Carrie Fisher had one, and it was really, really good.

In a world where celebrities are part of the same bubbling social media morass as the rest of us, and fans seem to feel that they’re owed direct access to their heroes, Carrie Fisher didn’t put up with any bullshit. She shitposted on Twitter the same way she lived, authentically and without holding back.

Whether she was trolling the official Star Wars account…

…or reminding everyone what “Slave Leia” really stood for…

…or just tweeting “Gay” or “flabby buttocks” with no explanation or context,

She was also a fan of extreme emoji usage, often spelling out entire words with the symbols. Among eccentric celebrity emoji-ists, only Cher really came close. And if your account and Cher’s are mentioned in the same sentence, you know you’re doing Twitter properly.

Her trolling was also extremely sharp. Who could forget the time she jokingly(?) called Donald Trump a cokehead?

When sexist jerks criticized her for aging during the nearly 40 years between A New Hope and The Force Awakens, she told them to blow her and was hailed as a hero and role model.

She did it again when she was accused of being too old to do motion capture for a younger Leia in Rogue One:

Truly, this is how you do Twitter. While many other celebrities allow themselves to be baited into public arguments with angry eggs, Fisher always stuck up for herself while giving as few shits as possible about what a bunch of online strangers thought.

And, as icing on the cake, she also posted heaps of cute pictures of her waggle-tongued French bulldog, Gary.

If you tried to write the playbook for celebrities in the age of social media, you’d just end up with a printout of twitter.com/carrieffisher.

Even at its best, Twitter is always going to be kind of dumb. It will never be cool or transcendent, especially when it’s coming from icons who have conquered other, richer forms of media. But at its worst, celebrity Twitter can be godawful and completely undignified. It’s famous and powerful millionaires feuding like children with people they don’t even know, revealing their ignorance, , or otherwise falling short of the heroic images we’ve projected onto them. It’s Donald Trump, someone Fisher frequently tweeted that she couldn’t stand, raising the specter of a nuclear arms race.

And, as we watch hundreds of corporations celebrate her life with cheesy branded tweets (in accordance with the immutable laws of #content), it’s depressing to know that she’s not here to tell them to go fuck themselves.