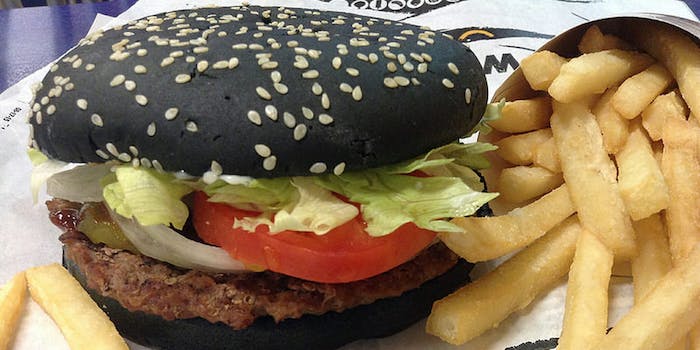 It’s a big month for people who love novelty foods: In addition to a staggering spectrum of candy, October has also ushered in Burger King’s #HalloweenWhopper—their signature burger, but with a black bun.

On a scale of 1 to freaked out, how hungry are you right now? A.1. #HalloweenWhopper. pic.twitter.com/lBYRsKlbHC

So far, so pointless—though that never stopped anyone from ordering something at a drive-thru. And in terms of taste/presentation, it doesn’t seem there were many complaints. Until these customers hit the bathroom.

I had a black whopper yesterday, today my poop is green as Piccolo. I will not be eating another black Whopper. pic.twitter.com/1LzrJKoNDs

My stool is bright green. Even my poop is spooky because of that damned whopper. Never again! @BurgerKing pic.twitter.com/1xDmVG873R

Ate #HalloweenWhopper yesterday. Had #GreenPoop today. Those black buns tricked me into a food coloring nightmare. Shame on #BurgerKing

Inevitably, some folks started snapping photos of their green excrement. Don’t scroll down any farther if that’s not something you want to see.

@BurgerKing this is the 3rd time ive had a blue-green bowel movement after eating a Halloween Whopper yesterday. pic.twitter.com/eUseot4wX7

*WARNING*
If you eat the new Black @BurgerKing Whopper it will make your poop green. You've been warned pic.twitter.com/naU3i93DAN

While it may be alarming, green poop is generally nothing to worry about, health-wise. As a former roommate of mine discovered after eating a giant bag of green apple licorice twists, it’s just what happens when you ingest an ungodly amount of food coloring. In fact, “why is my poop green” ranks among the most commonly Googled queries in the English-speaking world.

I was gonna ask Google a work related question and ended up learning A LOT more than I thought I would. #GreenPoop pic.twitter.com/t1diz1gReW

Burger King has yet to comment on this apparently unforeseen side effect of the Halloween Whopper. It certainly suits the spooky season, however.