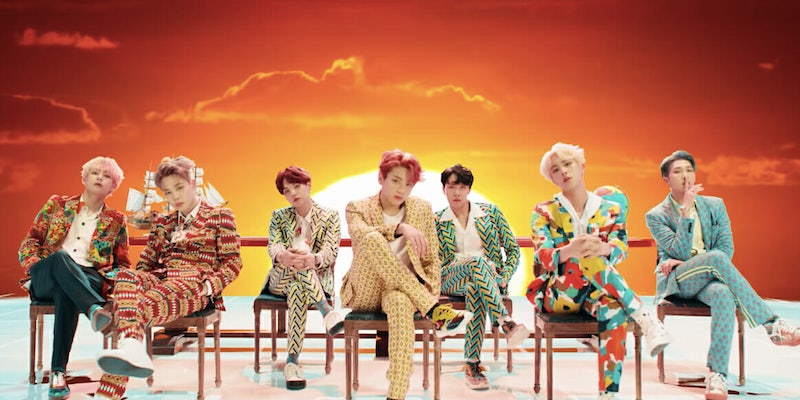 BTS fans at war over these divisive Mattel dolls

Mattel gave fans of South Korean boy band BTS (an acronym for Bangtan Sonyeondan or “Beyond the Scene”) its first complete look at the line of BTS fashion dolls on Twitter Monday night. However, the BTS fandom, which calls itself BTS ARMY (for “Adorable Representative M.C for Youth”), is split between disappointment and appreciation for how the much-awaited dolls turned out.

There’s a doll for each of the seven members of BTS—RM (Kim Namjoon), Jin (Kim Seokjin), Suga (Min Yoongi), J-hope (Jung Hoseok), Jimin (Park Jimin), V (Kim Taehyung), and Jung Kook (Jeon Jeong-guk)—all wearing miniature versions of the bright-colored suits they donned in the YouTube record-breaking music video for their hit song “Idol.” (The video earned 45 million views within the first 24 hours since its release in August and currently has over 410 million views.)

The maker of Barbie dolls had been teasing fans on Twitter all of last week, giving them a glimpse of how each doll will look—from a close-up of a dimple, the corner of a lip, and top of the head to silhouettes of all seven members’ dolls.

In an interview with GeekSpin, the company revealed that the dolls will be 11.5 inches tall and have “11 points of articulation with fully poseable arms, legs, hands and feet.” The dolls officially go on sale on Sept. 1 for $20 each or $140 for the complete set of seven. A special set of UNO cards, to be played like a regular UNO game save for a special BTS-inspired rule and card, will reportedly be released on the same day.

Mattel first announced its collaboration with the K-pop group and its Korean record label Big Hit Entertainment on Twitter back in January. The dolls are just the beginning for the Mattel-BTS “multi-category license.” According to a press release on the toy company’s website, it “will create dolls, collectible figures, games, and more.”

The announcement and the official brand Twitter account’s succeeding interaction with fans led to more than 25,000 additional followers within 24 hours since the news broke, notes Forbes. The magazine added that unofficial BTS dolls and plushies are in high demand on Etsy, where they cost between $20 to $100. A previous collaboration with Line Friends, a subsidiary of Korean messaging app Line, for a collection of items like apparel and pillows bearing cartoon characters designed by the boy band proved to be a hit in the U.S. and across the globe.

“With the fans’ dedication of wanting products that are specifically approved by the band, as well as their interest in physical tokens of their fandom, as long as the BTS dolls are on the same level of quality as a physical BTS album, this launch is going to be a big hit,” Forbes predicted in January.

However, the first look at the BTS x Mattel dolls initially didn’t sit well with fans. Within minutes of being unveiled on Twitter, fans flooded the company’s posts with comments expressing disappointment. Many of them used memes and GIFs of their idols to express their disapproval, some imagining how the boys would react when they see their dolls. (Read: They don’t seem too pleased.)

BTS seeing the Mattel dolls for the first time:pic.twitter.com/qY5STJ40zf

#mattel we need to talk pic.twitter.com/xzkQRMFVuU

Some fans were dissatisfied with how the dolls’ hair turned out.

User @kiwiijoon went ahead and “fixed it (kinda).”

@hoseoka_20 compared the BTS dolls to that of another boy band, One Direction, which fans seem to imply look nothing like the pop stars.

(Although @khiarayeah pointed out it could’ve been worse.)

A number of people think the unofficial fan-made dolls look better than the Mattel ones.

Not all fans hate it, however. Some members of the BTS ARMY think the dolls aren’t that bad and even commended Mattel’s attention to detail—from the outfits to the distinct facial features and the male dolls’ makeup. As @outroyn admits, “I really like it … Yoongi’s eyes are really pretty and detailed, Jimin’s lips are identical, and [there’s] the dimple for Joon. Mattel worked hard on the facial features, they have a point for that.”

One of the more popular comments showing support is that of @JiminsBookmark: “I absolutely appreciate the effort you put into these dolls. I can’t imagine the pressure your team must have felt to get them right! Well done! The attention to detail in their faces and clothing is fantastic! Thank you!”

I absolutely appreciate the effort you put into these dolls. I can’t imagine the pressure your team must have felt to get them right! Well done! The attention to detail in their faces and clothing is fantastic! Thank you!!!

on the serious note, it is really just the hair that makes the dolls go off a big time but if you will look closely mattel did a great job with the facial details pic.twitter.com/plYUe5Zw9Y

Concerned fans also remind the fandom to be nice to Mattel and to avoid tagging the company in tweets and leaving rude comments on the official Twitter account. They’re encouraging members to instead be grateful for the dolls so as not to give the fandom and the boy band a bad reputation.

guys do NOT tag mattel or bts in your tweets about the dolls and PLEASE stop replying under mattel’s tweet. don’t ruin our, and the boys’, reputations

You guys might not like the Mattel dolls but it’s not necessary to make fun of them in the comment section. For a $20 doll, they turned out pretty good. Please be mature and considerate of other people’s work. #BTSDollsOfficial pic.twitter.com/SLVPj1IYHU

BTS ARMY members policed others who posted negative comments and asked them to delete them, too.

there was a tweet going around with 18k rts when i first saw it (prob more now) calling these dolls creepy and weird and calling armys freaks for it and now yall are using them to diss mattel dolls n it just shows u dont even have an opinion, youre just genuinely miserable people pic.twitter.com/mzFRyegkT1

We have yet to receive a response to our request for a statement from Mattel regarding fans’ reactions to BTS dolls. We’ll update this story if we do.

We’re certain that in spite of the initial backlash, BTS stans will still be lining up for these dolls when they go on sale this summer. As @Harrys_youth declared, “I will buy all seven, you can’t stop me spending my check.”

the hair lowkey ain’t it but we still stan and i will buy all seven YOU CANT STOP ME SPENDING MY CHECK pic.twitter.com/tvGz91T5VI

Ahead of the dolls’ release, BTS is set to drop the highly anticipated new album, Map of the Soul: Persona, on April 12, followed by the group’s April 13 Saturday Night Live debut. Fans in the U.S. also have a chance to catch them in concerts around the country this May as part of the boy band’s world tour.