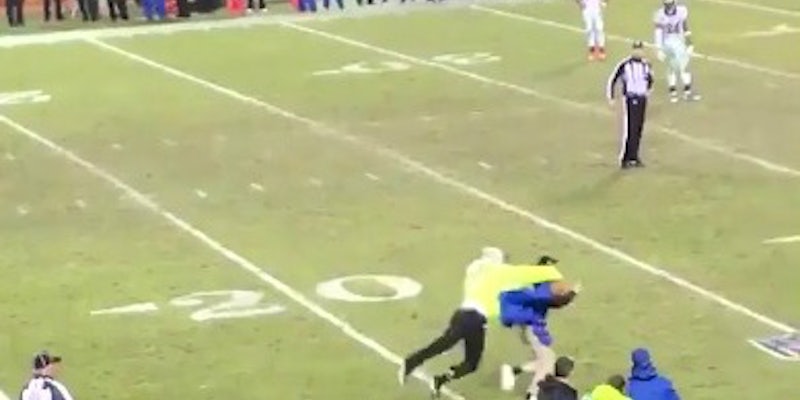 This Broncos fan runs on field, gets decimated by security

Sometimes fans running on the field during sporting events are clever enough or fast enough to get away from the security guards who only want to catch the intruder and escort him away from the action.

But sometimes, fans get decimated by overambitious security personnel. Like, this dude who ran onto the field during the Chiefs–Broncos game Sunday night and almost immediately got planted into the ground by a dude named Tyler.

Marvel at the guard’s initiative and his tackling form.

Best tackle of game was by a guard named Tyler on a Denver fan on the field! @ArrowheadPride @TerezPaylor @TJCarpenterWHB @ProFootballTalk pic.twitter.com/pIvS9VkhmM

Just the latest Bronco to get tackled tonight. #ChiefsKingdom pic.twitter.com/JA98It7WUD

Notice the cheers from the crowd after the guard got his man. Even Kansas City cornerback Marcus Peters was pumped by the guard’s impressive stop.

Marcus Peters was so pumped when that Broncos fan got tackled by the security guard. Like, really pumped. pic.twitter.com/1vJvwpLGlC

The Chiefs beat the Broncos 33-10 on Sunday to knock Denver out of NFL playoff contention. But clearly the biggest winner of the night was Tyler, the Arrowhead Stadium security staff, and fans who got to witness the most exciting hit of the night.