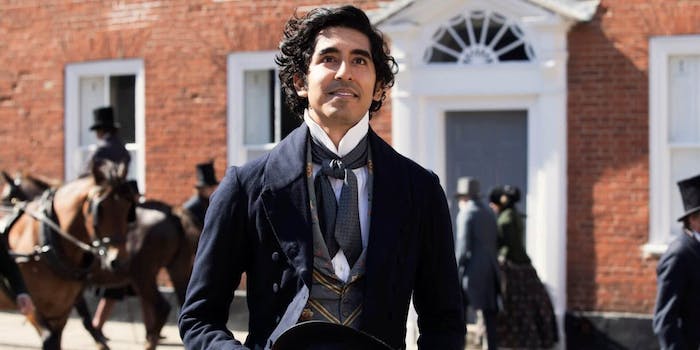 The Personal History of David Copperfield

Dev Patel stars in this witty and original new Charles Dickens adaptation from 'The Death of Stalin' filmmaker Armando Iannucci.

It’s hardly breaking news to say that Dev Patel has the magnetic screen presence of an old-school Movie Star with a capital M. But in case you were any doubt, The Personal History of David Copperfield provides more evidence. Fizzing with charisma, Patel plays the goofy yet thoughtful hero of this lively Charles Dickens adaptation, directed and written (with longtime co-writer Simon Blackwell), by British comedy icon Armando Iannucci.

The Personal History of David Copperfield

Iannucci is best known for dark political satires like Veep and The Death of Stalin, so this is a big departure for him. As a Victorian rags-to-riches story (actually more like rags-to-riches-to-rags-again, several times over), David Copperfield delivers plenty of the social commentary we’ve seen from Iannucci’s other work. But otherwise, it’s a great deal more hopeful and warm than you might expect. Filmed in the run-up to Brexit, it presents a diverse and optimistic vision of Britain, acknowledging class divides in a story where kindness and community spirit ultimately win out.

Set in the 1840s, David Copperfield follows the title character’s life from birth to adulthood, surrounded by a quirky supporting cast of famous British character actors. Young David (Jairaj Varsani) has a suspiciously happy childhood for a Dickens protagonist, but the other shoe drops when his mother marries a sadistic snob who packs him off to work in London. Lodging with the friendly but perpetually broke Mr. Micawber (Peter Capaldi), David spends the rest of his childhood working in a factory.

Now grown up into Dev Patel—who at 29 is still adorably boyish, like a lanky 6’2” Labrador puppy—David meets new allies like his eccentric Aunt Trotwood (Tilda Swinton), and enemies like the odious Uriah Heep (played by Ben Whishaw, being hilariously repulsive for a change.) Rosalind Eleazar is delightful as his friend Agnes, a clever young woman armed with a sly sense of humor, and endless patience for her alcoholic father (Benedict Wong). Aneurin Barnard, recovering from the universally panned adaptation of The Goldfinch, plays David’s posh and initially unpleasant-seeming friend Steerforth; a great example of Dickens’ skill for injecting pathos into what could’ve been a broad and stereotypical character.

As you’ve probably gathered by now, David Copperfield’s plot meanders all over the place. David careens up and down the economic ladder in a series of wild twists that fit perfectly with the soap opera format of a Victorian serial, but would feel absurd in a traditional screen adaptation. Fortunately, this movie is anything but traditional. Despite being full of familiar faces playing familiar types, and being set in the over-utilized world of 19th century England, it still feels very fresh. That’s partly thanks to the diverse casting choices, but mostly because Iannucci adopts a whimsically theatrical visual language. Using painted backdrops and 19th-century camera tricks, he understands how to make things fun and stylized without becoming twee. Tonally, David Copperfield lands somewhere between Paddington and The Favourite, two movies I never expected to list in the same sentence.

Framed as a memoir, David Copperfield celebrates Dickens’ prose via David’s own evolution as a writer. From a young age, he’s fascinated by human nature, noting down memorable turns of phrase and developing a keen skill for mimicry. The character and the film are really one and the same. David’s family and childhood are viewed with a warm glow of nostalgia, tempered by the kind of well-observed mockery we can only aim at our closest friends. We see the world as he sees it, from the colorful locations and theatrical scene-changes to the film’s sympathetic depiction of mental illness—a rarity for the period. David’s distant relative Mr. Dick (Hugh Laurie) is plagued by intrusive thoughts of the long-dead King Charles I, living (by necessity) in peaceful seclusion with Aunt Trotwood. Instead of being portrayed as a tragedy or a burden, he’s always a friendly face in David’s life, joining a community of characters who help each other out when life gets hard, which it often does.

Even if you’re not usually a fan of costume dramas, there’s a good chance you’ll enjoy this version of David Copperfield. It’s a feel-good story without too much schmaltz, combining Armando Iannucci’s satirical wit with a more upbeat attitude, delivered in a rich and vibrant style. You’re also guaranteed to fall in love with Dev Patel, just in case you haven’t done so already.

The Personal History of David Copperfield is currently screening at the London Film Festival and is due for release in 2020.