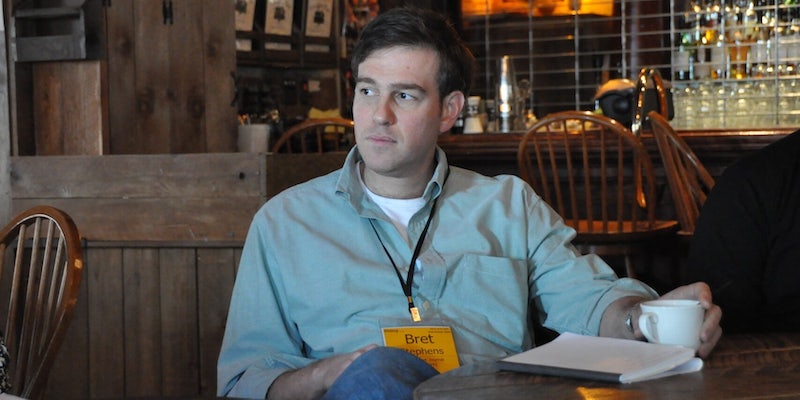 Stephens wrote to GWU professor Dave Karpf—and his boss—to complain about the tweet.

A New York Times columnist, upset about a university professor’s tweet calling him a “bedbug,” complained to the professor’s boss in an email—only to have the tweet blow up.

Dave Karpf, an associate professor at George Washington University, shared a tweet on Monday about bedbugs in the newsroom, and he joked that Times columnist Bret Stephens, a known skeptic of climate change, represented the bedbugs.

“The Bedbugs are a metaphor,” he wrote. “The bedbugs are Bret Stephens.”

According to follow-up tweets, Karpf’s original tweet had only a few likes and zero retweets. But now it’s gone viral thanks to the utter pettiness of the man whom he called a bedbug.

This afternoon, I tweeted a brief joke about a well-known NYT op-Ed columnist.

He just emailed me, cc’ing my university provost. He is deeply offended that I called him a metaphorical bedbug.

His tweet went viral even before he even named Stephens in it. “He just emailed me, cc’ing my university provost. He is deeply offended that I called him a metaphorical bedbug,” he wrote.

And finally, he shared a screenshot of the email where Stephens, who wrote a column last year titled “Free Speech and the Necessity of Discomfort,” asked invited him over for dinner with his wife and kids so he could prove his civility.

“I’m often amazed about the things supposedly decent people are prepared to say about other people—people they’ve never met—on Twitter,” Stephens wrote. “I would welcome the opportunity for you to come to my home, meet my wife and kids, talk to us for a few minutes, and then call me a “bedbug” to my face.”

“That would take some genuine courage and intellectual integrity on your part,” he continued in his very composed tantrum. “Maybe it will make you feel better about yourself.”

If the email itself wasn’t enough, Stephens further included the George Washington University provost in the email.

When you threaten someone's job because you don't like that they said something mean about you, and you're the kind of person whose threats carry a punch, you make other people scared.

College students are too sensitive.

Sincerely,
The guy who had to quit Twitter because he was called a bedbug

Many people took the opportunity to remind Stephens (and the world) the level of threats they receive on the platform when they’re not cis straight white men:

And I just cannot get over how mild an insult “bedbug” is. Stephens and his ilk would simply drop dead after being a woman, black, queer, or some combination thereof online. My day started with being called a rancid cunt and it’s just Monday.

The type of messages and tweets I get on a daily basis (many of which include specific threats of rape and murder) are so extreme that getting called a bedbug would almost be sweet in comparison. NY Times might need fumigation. But their insulation works really well apparently. https://t.co/iS8IQYg2xB

It probably is a bummer to be called a bedbug but people have written to me that they hope I get raped. Must be nice to get insulting comments and feel comfortable inviting the person to your home!

And of course, there were memes and a brief edit on his Wikipedia bio—identifying Stephens as a bedbug—because of the internet. His bio has since been edited back:

HE CALLED YOU A BEDBUG, BRET pic.twitter.com/WdxpTNHWBd

Bret Stephens never responded to the dozens of climate scientists who pointed out serious errors in his first NYT column.

But make a joke on here without even tagging him and he demands a family meeting then rage quits Twitter.

Real bedbug move if you ask me.

Stephens attempted to defend himself Tuesday morning on MSNBC Live.

“I wanna be clear I had no intention whatsoever to get him in any kind of professional trouble,” he said in the interview, adding that it’s protocol everywhere—including at the Times—that managers know how “their people…interact with the rest of the world.”

When the host asks him if this is the worst thing he’s ever been called, he responded, “There’s a bad history of being…analogized to insects that goes back to a lot totalitarian regimes in the past.”

On MSNBC, Bret Stephens characterizes Dr Dave Karpf referring to him as a metaphorical "bedbug" on Twitter as akin to language used by "totalitarian regimes," adds that he had "no intention whatsoever to get him in any kind of professional trouble" when he tattled to Karpf's boss pic.twitter.com/iNJAvzPnMt

Stephens has since deactivated his Twitter, but not without an equally petty goodbye note. According to Mediaite, he wrote, “Time to do what I long ago promised to do. Twitter is a sewer. It brings out the worst in humanity.” He then apologized for “any part I’ve played in making it worse.”