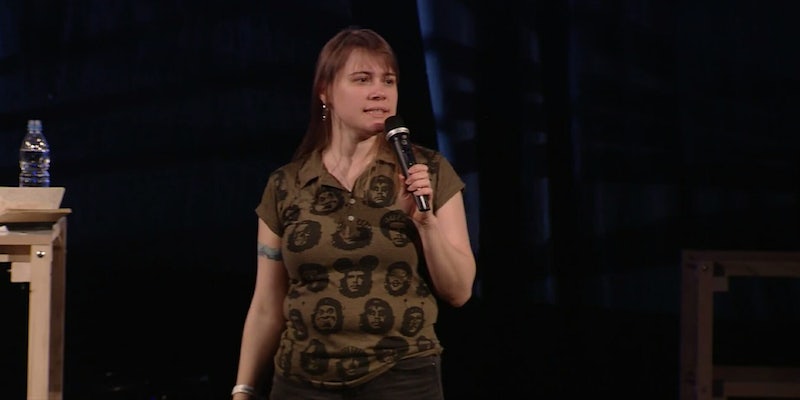 She has called a neo-Nazi 'an old friend of mine.'

On Tuesday, tech journalist Quinn Norton was named to the New York Times’ editorial board as its new lead opinion writer covering tech. However, it didn’t take long for Twitter users to point out a series of tweets from Norton in which she used racist and homophobic slurs, prompting the print publication to let her go hours later.

Norton has had an immense influence on tech journalism, serving both as a writer for Wired as well as Gizmodo and the Atlantic. But shortly after the Times announced her hire on Tuesday, her friendship with American neo-Nazi Andrew “weev” Auernheimer came to light. She previously called him “an old friend of mine,” defending her connection with him while admitting he is “terrible.”

This already didn’t sit well with the internet, especially in light of a column she wrote on the moral complexity of John Rabe, a Nazi Party member who helped Chinese citizens escape Japanese war atrocities. Then people unearthed tweets in which Norton used homophobic and racist slurs. Particularly, she openly used the N-word during an analogy on terrorism, retweeted a joke with the N-word about President Obama, and repeatedly used the words “fag” and “faggot” in conversation with others during 2013 and 2014.

“Here’s the deal, faggot,” Norton wrote in one tweet from 2013. “Free speech comes with responsibility. not legal, but human. grown up. you can do this.”

@EatingMyPeaz at this point, as far as I'm concerned no one is a terrorist, in exactly the same way no human being is a nigger.

@VizFoSho here's the deal, faggot: free speech comes with responsibility. not legal, but human. grown up. you can do this.

What a shocker, garbage human and useful idiot for the hard right, @Timcast, defends a racist garbage human the #NYT has hired as an opinion columnist.

Quinn Norton can go back to racist, homophobic Neo-Nazi hell she came from. Bye. pic.twitter.com/2jlnoofPDl

Shortly after Norton’s tweets surfaced, the New York Times said it was “very concerned” with her statements, vowing to investigate them. This eventually led the Times to let her go.

“Despite our review of Quinn Norton’s work and our conversations with her previous employers, this was new information to us,” Times editorial page editor James Bennet said in an official statement. “Based on it, we’ve decided to go our separate ways.”

"Despite our review of Quinn Norton’s work and our conversations with her previous employers, this was new information to us. Based on it, we’ve decided to go our separate ways." pic.twitter.com/ZtQnq0MLF8

Norton’s career at the Times may be incredibly short-lived, but her hiring continues to cause an online stir, with many Twitter users complaining that the American print publication didn’t look deep enough into Norton’s background before bringing her on. Many are left wondering whether the Times has made the same mistake with other editorial staff members, too.

For the record, I was a fan of @quinnnorton's writing and reporting — and then I read her tweets about weev and neo-nazis.

They mean what they say, and they want to kill people.

Anyone cheering the hiring of Quinn Norton — we have issues. yes, it matters who your friends are.

If NY Times wants to offer some minority opinions why not offer actual minorities’ a chance to voice their opinions or give a voice to the poor or rural or literally any one else who doesn’t have a voice.

Some believe Norton’s hiring follows a longer legacy in which the Times purposefully hires far-right thinkers who espouse harmful ideas and skew facts to stir controversy and garner clicks.

Others compared her short-but-controversial tenor to another outspoken firebrand.

By my very rough math, Quinn Norton lasted @ the New York Times approximately 0.025 of a Scaramucci

Norton has since changed her Twitter display name to “Well that was fun,” defending her tweets and saying there is “no harm no foul” toward the Times for dropping her.

“I’m sorry I can’t do the work I wanted to do with them,” she tweeted last night. “I wish there had been a way, but ultimately, they need to feel safe with how the net will react to their opinion writers.”