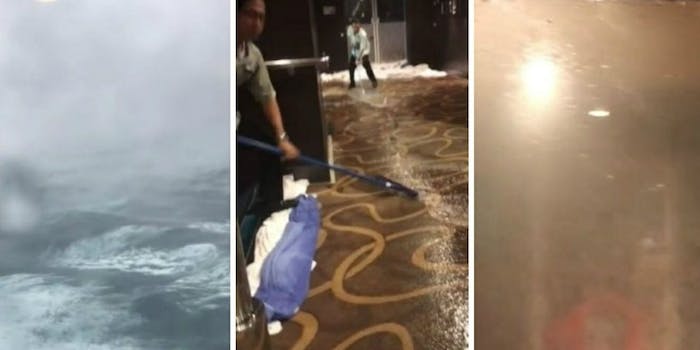 Time to break out the Dramamine.

With a Norwegian Cruise Line ship having to sail through the bomb cyclone storm that dumped snow and ice-cold temperatures on some of the East Coast this week, videos emerging from that boat ride show a vessel that was rocked by big waves and flooded by seawater.

The bomb cyclone might have looked wild from space, but it’s a good bet those who experienced it on the Norwegian Breakaway ship in the middle of the Atlantic Ocean didn’t feel such wonderment.

“I thought I’d never be in a situation where I would say that’s the scariest moment of my life. This was the worst moment of my life,” passenger Karoline Ross told CBS New York after the ship, which traveled from the Bahamas to New York, docked. “… When you’re on a boat in the middle of the ocean and water is pouring down the stairs, you’re thinking, ‘This is not going to end well.’”

If you watch the videos below, you can see her point.

This is a good sign we are almost home huh? My balcony (inside and out) are full of ice. The rough ride ended around 5AM (thank gosh!). #NCLbreakaway pic.twitter.com/s59i6zHZiD

People were also upset about what they said was a lack of communication between the crew and the passengers.

@CruiseNorwegian #NCLbreakaway help me understand why we get 20 Announcements per day about bingo and art, but when the ship takes on water and is listing 9 degrees they are silent for hours. This is unacceptable!

On #nclbreakaway and we are taking on water from the storm and the ship is listing at 8 degrees. No communication to guests. @CruiseNorwegian pic.twitter.com/8bmom8BEno

The cruise line eventually put out a statement saying the Norwegian Breakaway “encountered stronger than forecasted weather conditions” and it apologized for “any resulting discomfort” passengers might have experienced.