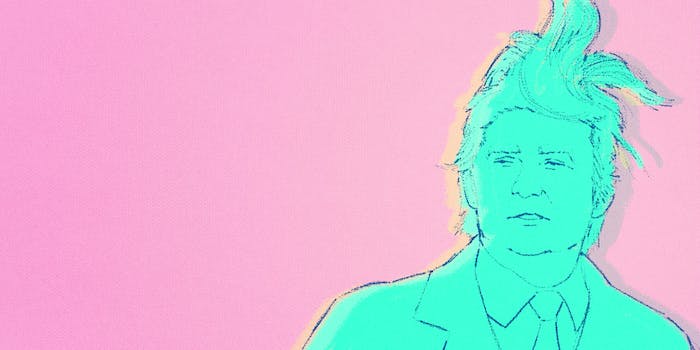 It's gonna be yuge.

For a brief shining moment, it seemed possible to ignore Donald Trump’s candidacy for the 2016 Republican presidential nomination. He was just a preening reality TV star with a penchant for self-promotion and some questionable views on immigration.

But after he started clobbering his GOP rivals in the polls and took center stage at the first debate between leading Republican candidates in Cleveland earlier this month, keeping Trump news off your radar effectively became impossible—no matter how much wishful thinking one devotes to the effort.

A proposed browser extension by developer James Shamsi aims to change all that. The project is called #TrumpBlock, and it functions exactly as advertised: It tracks keywords related to Donald Trump and erases all traces of news coverage about the billionaire.

Instead of seeing an endless stream of news stories about Trump in their Facebook news feeds, #TrumpBlock users can scroll blissfully unaware of whatever insults Trump lobbed at his ever-growing list of political enemies that morning and the furious backlash that inevitably ensues in the afternoon.

Before Shamsi makes the app, though, he wants to make sure there’s enough demand for it. Social media savvy enough to land a job by putting his résumé on Tinder, Shamsi wisely decided he’ll develop the app if 2,000 people tweet the hashtag #TrumpBlock.

“Talking to my friends about politics, I found that barely anyone else knew who was running, or what their main arguments/stances were—however, everyone knew who Trump was and what his views are,” Shamsi explained in an email to the Daily Dot.

Shamsi’s frustration stemmed from feeling decidedly less informed about where the 2016 candidates stand on the issues than he was in the previous election cycle.

“It came down to this: We all used Facebook and Twitter as one of our primary sources of information, and all that was posted about politics from news sites on these platforms [was] about Trump, because it was easy clickbait—and because of this no one was really posting about anything else,” Shamsi realized. “Our news streams were just flooded with idiotic racist quotes from Trump, instead of being able to learn about actual candidates who actually have thought out logical views.”

While #TrumpBlock gained some traction on social media among those sick of the media’s Trump fixation, not everyone was trilled with the effort. Shamsi noted that he had been hit with a cease-and-desist email charging that the #TrumpBlock site was defaming Trump’s character. Even so, Shamsi remains skeptical of the message’s seriousness.

“We’re unsure if this was a joke or not,” he noted on the #TrumpBlock website. “But… if we do end up being sued we may need to launch a Kickstarter to fight the case.”

Shamsi has some experience helping people curate celebrities they dislike out of their online experience. Earlier this year, he created a Chrome extension called KardBlock, which removes all mentions of the extended Kardashian family—from Kim to Khloe to Kanye.

As with the polarizing Trump and American politics in the summer of 2015, consuming pop culture today also typically requires a certain level of involuntary Kardashian intake. And some people have had quite enough.

The other option is, of course, to take Trump seriously as candidate, analyzing where his policies—on criminal justice reform, for example—fall relative to those of his GOP rivals. Or even dig into the history of scandals around his questionable business dealings.

Either way, it doesn’t look like Trump 2016 is going away anytime soon, so everyone’s going to either have to accept the phenomenon or find new and improved ways of ignoring it.