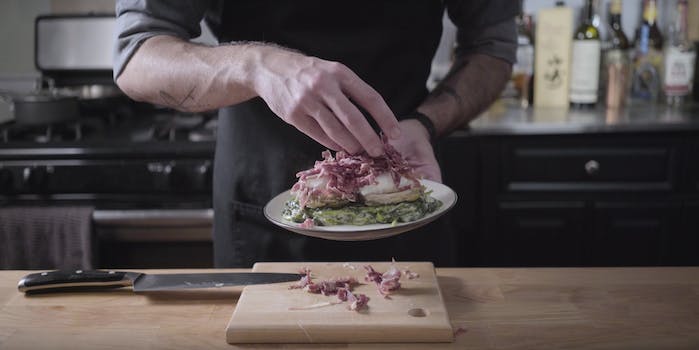 This extravagant dish from ‘Archer’ will make you give to charity

When else can you say eating black truffle shavings helped someone in need?

When last we spotted Binging With Babish creator Andrew Rea, he was elbow-deep in Monica’s moist-maker Thanksgiving leftovers sandwich from Friends. Now the burgeoning YouTube chef has something else to give thanks for.

In his latest video, Rea tackles Eggs Woodhouse, a practically gilded and “indulgently evil” variant of Eggs Benedict that involves béchamel, hollandaise, expensive-ass ham, a full stick of butter, black truffle shavings, caviar, and saffron. In the original Archer clip, Alton Brown describes it as “a cholesterol Katrina,” if that’s any indication of what this tastes like.

“The dish was almost inedible,” Rea told the Daily Dot via email. “My roommate and I tried our hardest, but couldn’t finish the damned thing.” Here it is, ready for its close-up:

In order to parlay some of this absurdity into a good cause (alleviating some guilt, if not the heartburn), Rea said it “seemed only fitting that something so horribly decadent should do some good,” especially around the holidays. So unlike his previous episodes, this one links out prominently to a GoFundMe campaign.

“I was receiving lots of requests for Eggs Woodhouse, and figured an over-the-top dish like that would receive some attention,” he explained. He then realized, hey, “as long as I’ve got folks listening, I should try and help some sort of food-based charity.”

He decided to spotlight Hour Children, a nonprofit dedicated to providing services for mothers recently released from prison (and, not coincidentally, a group with which he’s worked before). It’s part mentoring programs, part food pantry, part thrift stores, part childcare and housing, and all helping decimate the recidivism rate among women in New York.

In the day since the episode went live, the GoFundMe campaign has raised over $1,500 toward an Hour Children shopping spree of nonperishables for its food pantry—a not-inconsiderable sum, but still just a little over 10 times what this “single serving” of Eggs Woodhouse cost in ingredients.

Rea plans to leave the campaign running until just after New Year’s, so there’s plenty of time to contribute. And it doesn’t stop there: “Hour Children offered to let me tag along and film the food-buying process after the holidays,” Rea reports, so stay tuned for a follow-up video in January or February.