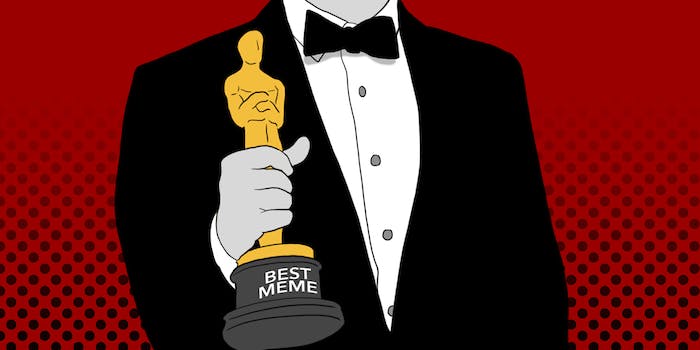 The 2018 Oscar-nominated films in memes

The Oscar-nominated films in 2018 range from earnest coming-of-age stories to period dramas to a romance between a woman and a fish man. They are all very different, and a few of them are exceptional. But the films share one important quality: the ability to spark memes and internet jokes.

We’ve rounded up the best memes about the nine films nominated for the coveted best picture category, as well as films nominated for other categories. If you haven’t seen all of the films—or any of them—don’t worry. We briefly summarized each film so that you’ll understand the jokes. Consider this an internet primer to the 90th Academy Awards ceremony on Sunday. Now, sit back, relax, and enjoy the meme show.

Everyone knows if you give the internet an image of a sign or a poster, people will inevitably Photoshop it. In the case of Three Billboards Outside Ebbing, Missouri, this rule applies to the titular billboards in Martin McDonagh’s polarizing film. Three Billboards follows a grieving mother (played by Frances McDormand) who buys a set of billboards in her town that call out the police department for not doing enough to find suspects following her daughter’s murder. The billboards in the film read, “Raped While Dying,” “And Still No Arrests?” and “How Come, Chief Willoughby?”

That’s all you need to know about the film to get the setup for the joke. People take the stills from the film that include the billboards and superimpose a different message. Usually, the message is about drawing attention to an issue.

Like the promise of a second Postal Service album:

The many billboards in the Simpsons also work well with Three Billboards memes.

The Three Billboards meme has also taken off in the real world. London activists used it in February to call out the lack of arrests in a police investigation of the Grenfell Tower fire, which killed more than 70 people.

Activists in London recreated a scene from the Oscar-nominated "Three Billboards Outside Ebbing, Missouri" to draw attention to the lack of progress made in the Grenfell Tower fire investigation, which killed 71 people in June 2017. pic.twitter.com/KruhMYLedE

Jordan Peele’s directorial debut, Get Out, was lauded by critics as a new kind of horror film. Chris Washington (Daniel Kaluuya) is a young Black photographer who goes on a weekend trip with his white girlfriend Rose Armitage (Allison Williams) to visit her parents. Once he arrives, Chris starts to notice that something is definitely off. The climax of the film reveals a terrifying reality: Rose’s family transplants the brains of white people into the bodies of Black people. The host gets trapped in what’s known as “the sunken place.”

There were several memes about “the sunken place” following the film’s release in February 2017. Peele initiated several of them:

"Now you're in the Sunken Place" pic.twitter.com/e29hs8d60g

"Now you're in the Sunken Place" pic.twitter.com/Nhzh7YiZyJ

In one scene in the film, Marcus Henderson, who plays Walter, is seen running in the middle of the night. It looks like he is running straight for Chris, but at the last second, he turns a corner. The scene sparked the “Get Out Challenge,” in which people posted their own running-toward-the-camera videos.

There were also a lot of memes about the plot:

The Shape of Water

Guillermo del Toro’s Shape of Water is about a woman who falls in love with a fish man, so this one was easy. Cue references to every human-aquatic creature relationship in the history of pop culture. Or, you know, a picture of Don Jr. swimming with a dolphin.

The Shape of Water (2017) pic.twitter.com/BXqOh0rqhL

Based on the advertisements alone, you might think Phantom Thread is a period drama about fashion. But it’s not really about fashion. Daniel Day-Lewis plays Reynolds Woodcock, a very fussy fashion designer in 1950s London who falls in love with a woman named Alma Elson (Vicky Krieps). Phantom Thread is a layered story about the couple’s relationship—and Lesley Manville, who plays Reynolds’ sister Cyril, often steals scenes.

So how did this film inspire so many memes? To begin with, there’s Reynolds’ comically large breakfast order at the beginning of the film. It was easy to joke about:

ME: A Welsh rarebit, with a poached egg on top — not too runny — bacon, scones… butter… cream… jam — not strawberry. What else?
BURGER KING DRIVE-THRU: [inaudible]

There’s another scene in the film where Reynolds complains that Alma serving him tea unannounced is an “interruption.”

And, of course, there were memes highlighting the fact that one character intentionally poisons another character.

Call Me By Your Name

Call Me by Your Name is a coming-of-age story about 17-year-old Elio (Timothée Chalamet) and his relationship with a graduate student named Oliver (Armie Hammer), who is staying with Elio’s family in Italy one summer during the 1980s.

You will never look at a peach the same way again after seeing CMBYN. Many fans have put the peach emoji next to their display name on Twitter, and the pivotal scene was turned into a meme:

Call Me By Your Name (2017) pic.twitter.com/CcYFZzlB2E

Before CMBYN opened in theaters, a clip of Armie Hammer dancing to different songs became another meme:

The title of the film also set up a lot of jokes.

call me by your name (2000) pic.twitter.com/lHvb4igiSx

Yes, even a World War II drama can be meme’d. Christopher Nolan’s epic 2017 film was intended to be seen on a big screen—and, according to some people, on Imax. But those who didn’t see it in theaters ended up seeing it on much smaller screens. Like on the back of an airplane seat. And that’s the joke—this is a gorgeous film with wide, sweeping shots—and people are watching it on tiny, low-quality screens. The “finally getting to watch Dunkirk the way it was intended” line became the setup for the meme.

finally getting to watch Dunkirk the way it was intended to be seen pic.twitter.com/vSqGquIMs4

Watching #Dunkirk the way it was meant to be seen pic.twitter.com/OWalAU4MMn

finally getting to watch dunkirk the way it was intended to be seen pic.twitter.com/DHvH4ZKy9n

finally watching dunkirk the way it was intended pic.twitter.com/H23Mpk5OZX

No, The Last Jedi wasn’t nominated for best picture, but we’re including it on this list because it received a few Oscar nominations. And the memes are great. Star Wars film = great memes.

The porgs on the island of Ahch-To, where Luke Skywalker has isolated himself, were an internet favorite.

oh hey, seems there is a physical manifestation of my soul during a panic attack; it is called a "porg" pic.twitter.com/3ik9A8d5im

Another great meme from the latest installment in the Star Wars franchise was Ben Swolo. Who is Ben Swolo? He’s a meme created by the internet, who thought Kylo Ren’s (Adam Driver) shirtless scene in the film was hilarious. Kylo Ren’s real name, of course, is Ben.

The meme was a hit on Reddit, where many Ben Swolos appeared.

The 2017 sequel to the cult 1982 sci-fi film Blade Runner became a meme, but not for the reasons you would think. It all started when this poster was released:

I can't wait until somebody photoshops Gosling's collar higher and higher pic.twitter.com/kSOYTkngBw

Twitter is a great place in 2018 for Oscar memes, and some people on the website decided to meme every movie nominated for best picture. Yep, all nine. Some people even included other notable films from 2017 that were not nominated for an Oscar. We suggest clicking through the entire threads on these. Here are some previews, featuring films that we didn’t cover above:

This thread consists entirely of scenes from The Office to illustrate the best films of the last year.

the academy award best picture nominees as THE OFFICE screencaps: a thread

This thread uses scenes from Phineas and Ferb.

Lady Bird, Greta Gerwig’s directorial debut, is a near-perfect film about a young woman in her last year of high school in the early 2000s. The film is just super earnest and delightful. Here are a few memes that reference scenes in the film:

2017, a year in movies: LADY BIRD (Gerwig), THE SHAPE OF WATER (Del Toro), PHANTOM THREAD (Anderson), CALL ME BY YOUR NAME (Guadagnino) pic.twitter.com/fLwlpLuwsp

This hilarious meme takes the title of Lady Bird seriously:

Here’s one for The Darkest Hour, a film that follows Winston Churchill’s early days as the British prime minister.

And, finally, The Post—a journalism movie about the Washington Post publishing information in the Pentagon Papers.

So which movie wins best meme? Unfortunately, the academy doesn’t have a category for that. Yet.