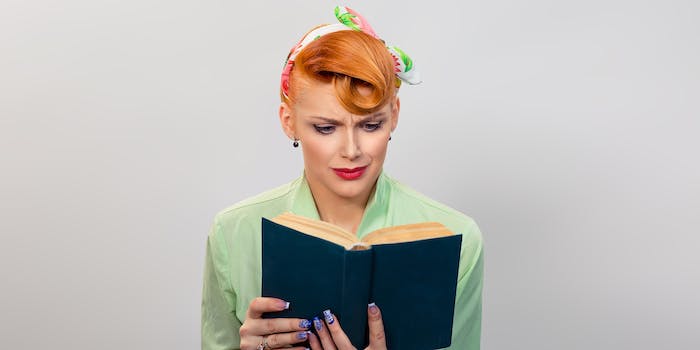 The year’s worst sex writing will make you contemplate celibacy

By the end of the month, a winner will be crowned for the worst sex writing of the year as part of Literary Review‘s Bad Sex in Fiction Award.

The best of the worst NSFW writing award has been going strong for nearly two and a half decades. Of course, there’s been plenty of not-hot erotica hidden in the pages of lauded works of fiction long before that. Literary Review just had the balls to call it out.

The U.K. literary journal and book-focused magazine has been celebrating some of #badsex’s greatest hits on Twitter and, oh man, is it boner-killing.

He finished fast & hard & when I wasn’t expecting it, & I choked on the thick white fountain & some of it came out of my nose #BadSex

A Doubter’s Almanac by Ethan Canin

Sweat burnished her body. The lean neck. The surprisingly full breasts. He would down another glass and return. #BadSex

The Day Before Happiness by Erri De Luca

“My body was her gearstick.” Some stiff competition for Literary Review’s 2016 Bad Sex in Fiction Prize @Lit_Review https://t.co/vCjfC3irMV

The Butcher’s Hook by Janet Ellis

His finger is inside me, his thumb circling, and I spill like grain from a bucket. He is panting, still running his race. #BadSex

Leave Me by Gayle Forman

"like she was a virgin, like this was the first time" Gayle Forman owes Madonna for that nom https://t.co/rpOrq71oxj via @@TelegraphBooks

The Tobacconist by Robert Seethaler

“Come, sonny boy!” he heard her whisper, and with a smile he let go.

A special shoutout goes to Jonathan Safran Foer, who apparently really has a thing for mountains. His latest recycled paper bag of a book, Here I Am, includes this asphyxiating abomination:

Finally, the nominees for the 24th Annual Bad Sex in Fiction Award are here! https://t.co/Gi76dVUNVG pic.twitter.com/D0l1kFLC2k

Also frequently nominated was president-elect Donald Trump’s Access Hollywood tape, which was merely disqualified for being a real live thing that someone thought was a good idea to say. Out loud.