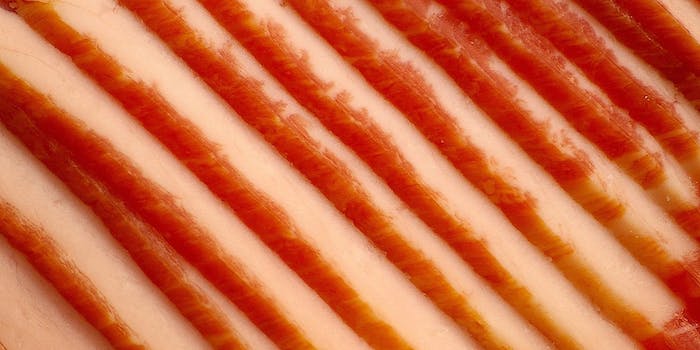 These people think the bacon cancer report is Islamic propaganda

You'll pry our pork from our cold, dead, greasy hands.

Right-wing meat lovers turned to Twitter Monday to express fears that a World Health Organization report linking bacon and other processed meats to cancer was nothing more than a vast, evil, Islamic conspiracy. Because clearly the road to global domination is paved with Halal foods.

What better way for #UnitedNations pimps for Islam to sneak toward Caliphate than attack Bacon (pork) as unhealthy. https://t.co/WKeOg6OyJJ

WHO Deems Bacon To Be Carcinogenic! Leads Point To Obama Muslim Conspiracy https://t.co/SBNH0ELDtN via @YouTube

What do you want to bet that Islam is behind the claim that bacon, ham and sausage cause cancer? #IslamicInvasion

Bacon to be classified as dangerous as asbestos by World Health Organization https://t.co/9qcgntJRkk

I'm a cynic. Is news that bacon is a potential carcinogen true or is it merely more evidence that Barack HUSSEIN Obama is a closeted Muslim?

Bacon,ham & sausages 'as big a cancer threat as smoking', WHO to warn https://t.co/adaRmDH9jm A study by Muslim scientists? #pjnet #tcot

This meat bs is illuminati conspiracy. Bacon could never be bad for you. Devil lies. 👹

But in all this hoopla, did anyone hit upon the simplest explanation for the WHO’s report? Seems to us that the group that stands to gain most from it are pigs themselves. So brace yourself for a swine coup in the near future: If you’ve read Animal Farm, then you know what’s coming.