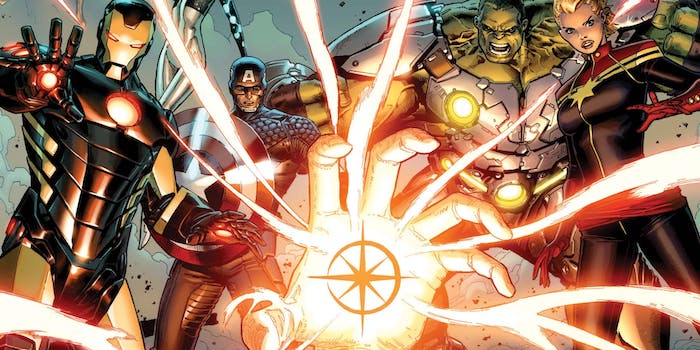 The 2 Marvel comics you need to read after ‘Doctor Strange’

This epic Avengers storyline is all about multiverse incursions—and it's one of Marvel's greatest crossover events.

This post includes spoilers for Doctor Strange in the Multiverse of Madness.

Doctor Strange 2’s post-credits scene teases future MCU storylines by introducing Clea (Charlize Theron), a recurring figure in Doctor Strange canon. But if you really want to explore the film’s comicbook origins, you should look further afield, to the 2013 run of Avengers and New Avengers. Not only is this arc relevant to the MCU—it’s just really, really great.

Written by Jonathan Hickman and drawn by a team of artists including Steve Epting and Jerome Opeña, this series led into the iconic Secret Wars crossover event. Hickman is known for writing dense, multi-character epics, and these two interlocking Avengers arcs are among his best: An apocalyptic sci-fi drama featuring the Illuminati, a team of Marvel A-listers who appear (in a slightly different form) as a tribunal in Doctor Strange 2.

The tribunal scene with Professor X, Mr Fantastic, and Captain Britain is one of the nerdiest moments in the movie, drawing from all over the Marvel multiverse. It also references the main threat of Hickman’s New Avengers: “Incursions,” a cataclysm where two universes collide, destroying one or both in the process.

Hickman’s New Avengers opens with a team of alternate-universe characters appearing through a portal in Wakanda, prompting Black Panther to call an emergency meeting of the Illuminati. As characters like Doctor Strange and Namor arrive, T’Challa’s monologue foreshadows some difficult moral choices they’ll make to save the world: “Goddess, oh goddess, save me from what this world demands. Save me from righteous men.”

Unlike the more diverse lineup seen in Doctor Strange 2, the comics portray the Illuminati as an all-male committee of morally ambiguous leaders with big egos. This storyline sees them grapple with how to avoid an incursion—something that essentially requires them to commit genocide by destroying another universe.

Meanwhile in the accompanying Avengers comic, a wider cast of heroes star in more straightforward action/adventure material, all tying into the same arc. “Superheroes vs the apocalypse” isn’t exactly a fresh idea, but these comics left their mark due to their epic sense of scope. They combine fine-tuned Marvel lore and characterization with a lofty, mythic style of storytelling.

MCU fans will recognize some of the main elements already, including the main Avengers team, a key role for the Infinity Gauntlet, the presence of alien villains like Proxima Midnight (who appeared in Avengers: Infinity War), and the central importance of the multiverse, which features heavily in several recent MCU spinoffs.

Rather than using alternate universes as a narrative device to explore different versions of the same characters, this storyline portrays the multiverse as an existential threat. Another universe could obliterate this one. At the same time, these comics are wide-reaching enough to cover some fun, smaller-scale subplots with secondary characters. It’s the kind of serialized story that can only really work in comic book format.

Thanks to its multi-volume length, Hickman’s Avengers is probably best read through the subscription service Marvel Unlimited. But in some ways it’s actually more accessible than a lot of shorter superhero comics. It has a clear beginning and end, and each issue opens with a “previously on” section and a guide to relevant canon. That makes it easy to follow the sprawling plot.

The MCU’s multiverse era is now in full swing, sowing the seeds for a potential Secret Wars-style crossover event. A lot of fans are theorizing that this how the X-Men and Fantastic Four will be introduced, combining the current MCU with a universe where mutants already exist. Hickman’s Avengers run gives us a glimpse of how something like that might pan out, with a much broader scope than the movies could ever achieve.