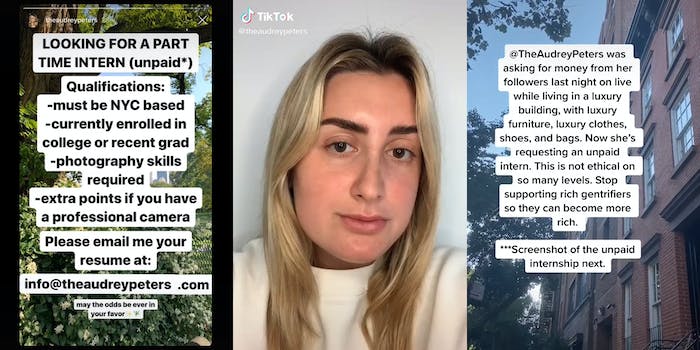 In an apology, Peters stated, 'I don't want any of my followers to think I'm scamming them.'

TikTok influencer Audrey Peters, @TheAudreyPeters, is being taken to task online for requesting an unpaid intern while living a life of excess.

An anonymous TikTok account, @user74258976544, with Peters in its crosshairs, wrote in a video that the influencer was “asking for money from her followers” Monday night “on (Instagram Live) while living in a luxury building, with luxury furniture, luxury clothes, shoes, and bags.”

“Now she’s requesting an unpaid intern. This is not ethical on so many levels. Stop supporting rich gentrifiers.”

Peters has over 213,000 followers on TikTok, where she frequently shows and tells of her excess in an effort to keep up her image. In another video on the account, Peters is shown on a recent Instagram Live asking for Venmo donations to pay for her “electricity bill.” @lareina commented that Peters “has on a Cartier love bracelet” and could pay her bill by offloading expensive clothes she doesn’t wear.

Subsequently, Peters said many of her fans had asked about being an unpaid intern for her. She later apologized for pursuing a fan to do unpaid work for her. The influencer also apologized for mentioning her money struggles and repeatedly stating her Venmo information: “I don’t want any of my followers to think I’m scamming them. Or anyone on TikTok. None of this was cute.”

The anonymous user said in another video directed toward Peters that the influencer’s apology was “a good step.” In a bulleted message, the poster wrote:

“They benefit the rich that can afford to to it, which in turn continues to help them get ahead. She can’t even offer college credit (but this still should be paid bc again – classist.) People should be PAID for WORK. Unpaid internships are bad for the economy and lower the wage for everyone.”