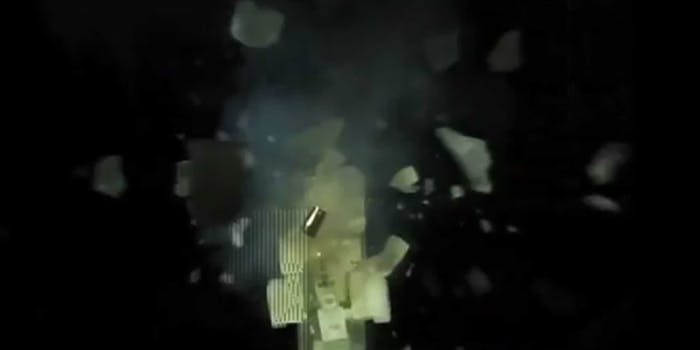 "The .380 bullets fired from the Liberator penetrate sufficiently to reach vital organs and perforate the skull."

As part of an ongoing investigation into this new technology, agents at the Bureau of Alcohol, Tobacco, Firearms and Explosives (ATF) have created and tested their own versions of the Liberator, the worlds first 3-D-printable gun. The Liberator was first successfully fired back in May, and the designs were made public online.

What the ATF discovered was that the Liberator, while in many ways not as effective as traditional firearms, could still be a lethal and effective tool for certain crimes, such as assassinations.

The ATF produced several different versions of the Liberator. All were made from the publicly available CAD file created by Defense Distributed’s Cody Wilson, but they were made out of different types of 3-D printer material. One, made out of plastic produced by the company Visijet exploded during a test firing, as seen in a video released by the ATF.

But other weapons made of acrylonitrile butadiene styrene (ABS), a common 3-D printing material, proved far more reliable and deadly. Even though these guns are not as powerful as most metal firearms, ATF testing demonstrated that projectiles from these weapons could penetrate several inches of soft flesh and a human skull.

“The bottom line is, the penetration results demonstrated that the Liberator is a lethal weapon,” said Earl Griffith, chief of the ATF’s firearms technology branch, addressing reporters in Washington this week. “The .380 bullets fired from the Liberator penetrate sufficiently to reach vital organs and perforate the skull.”

The Liberator can only be fired once before reloading. But because the mostly plastic gun can operate without its lone, legally-required metal component, it can evade metal detectors and conceivably infiltrate areas where firearms are banned. So even though the Liberator may not replace traditional firearms in most gun-related crimes, these special properties could make it the ideal tool for assassination.

“It is something that we’ve never seen before,” said Richard Marianos, an assistant director at ATF, according to the Huffington Post. “It can defeat metal detection, and that’s something we’re concerned about.”

Though these ballistics tests results are new, government officials have been monitoring the development of 3-D printable weapons since before the first trigger was pulled. The ATF started questioning Wilson, the Liberator’s creator, over his weapons manufacturing intent last year, months before he successfully fired the device. And federal lawmakers were already pushing for a 3-D printable gun ban as early as last year.

The Liberator is not the only firearm that can be manufactured through 3-D printing technology, however. Since its debut, a number of copycat pistol designs have shown up, while other developers have tried to create even bigger 3-D printable guns. And recently, an Austin, Texas firm demonstrated its ability to craft a metal gun through 3-D printing.