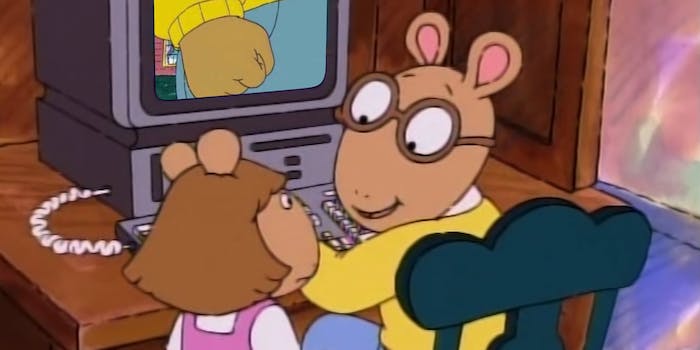 ‘Arthur’ creator Marc Brown loves all of your Arthur memes

Arthur, the quintessential kid’s show about an aardvark just trying to be regular kid, is celebrating two decades of existence. Creator Marc Brown gave a revelatory interview with Huffington Post looking back at all that Arthur‘s doing to educate and inspire. And, naturally, memes came up.

Over the summer, parent network WGBH expressed a little disdain over the more controversial Arthur memes out there. Brown, however, is an equal opportunity meme lover.

“I’m really having such a good time watching Arthur and all his friends pop up on BuzzFeed all the time,” Brown told the Huffington Post, marveling at the impact that show’s made on television and online. “It’s very interesting that I’ve been able to sustain these characters through an entire generation.”

The lauded children’s book author’s main audience may be kids just entering their formative years, but he’s no square. Elsewhere in the interview, Brown describes downing vodka shots with Vladimir Putin way back when Russia was just trying to get on the United States’ level when it comes to children’s outreach and not meddle with the presidency.

“As I remember it, we were in the Kremlin and the entire room was covered in gold leaf,” Brown recalls. “There were first ladies from all over the world and each one would give a toast. We all had to drink vodka shots after each toast and so things were getting a little fuzzy.”

Arthur would undoubtedly raise a clenched fist to that.

Read the full interview with Marc Brown at Huffington Post.